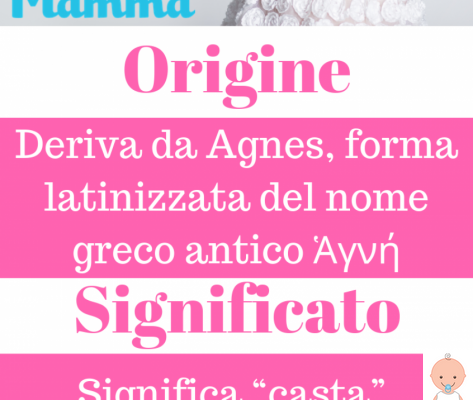 In the list of female names of ancient Christian tradition stands Agnese, a name that is certainly classic and at the same time obsolete today. We discover in this guide the origin, the meaning, the curiosities of this name for baby girl.

Agnese generally celebrates the name day on 21st January, when the Church remembers Sant'Agnese, virgin and martyr to the city under Diocletian, patroness of girls. But there are also other saints who are celebrated, among these we point out:

Origins and etymology of the name Agnese

The origin of the name Agnes is Agnes, the Latinized form of the ancient Greek name Ἁγνή (Hagnḗ), but according to other sources the word Agnes may derive from Anu, a Celtic goddess.

Meaning of the name Agnes

The Greek term hagnòs means "pure", therefore, on the basis of the Hellenic origin of the name, Agnes can mean "caste"Or" pure ". Later the name was associated with the Latin word agnus "lamb”And it is precisely for this reason that the iconography of Saint Agnes often shows the figure of a lamb.

Diffusion of the name Agnese

Thanks to the cult towards Sant'Agnese, the name spread like wildfire throughout Christian Europe, especially in England during the Middle Ages. Today it is certainly rarer in our country, even if its degree of popularity remains unchanged over the decades: according to ISTAT data on the most popular names in the country, in 1997, 440 girls were called Agnese and in 2022 there were 459.

Finally two curiosity on the spread of the name Agnese in other countries. In Spain the form Ines it is extremely popular and has spread to other countries, including the country, while in the United States the name Nancy, which originated as a diminutive of Annis, a medieval form of Agnes, is now used as a name in its own right.

Agnes is a person enthusiastic and often in a good mood, which is distinguished by its positive and optimistic nature. She is full of life, communicative, energetic, she loves to spread positivity around her. She has a deep sense of humor, hates monotony and strives to live a full existence and escape the routine. She has an innate curiosity, she is extroverted, sociable, always ready to leave for new adventures and she is not afraid of change, on the contrary she seeks it. She has great eloquence and communication skills, which is why he can easily attract the attention of others. It's a'loyal friend, sincere, available, always helps those in need and works hard to pursue their projects.

Equipped with great intellectual acuity, open-minded and ingenious, Agnese succeeds in everything she does, and is passionate about news and experiences. She is a woman full of charm, who manages to seduce, welcoming towards others and only a man with a strong personality will be able to conquer her.

What profession will Agnese make? She has a perfectionist and fussy nature that leads her to be extremely demanding of herself. Perfect for professions in the fields of communication, marketing, advertising, but also in the social field.

Precisely for her great curiosity and versatility in interests, but also for her adventurous spirit, the sign that comes closest to Agnese's personality is that of Gemelli.

Il green it is the color of Agnes, a symbol of enthusiasm, vitality and energy, also associated with an independent and free temperament.

Il citrus is Agnes's lucky gem, known for being able to strengthen the will, giving perseverance and determination.

We chose the song "Agnese" by Ivan Graziani.

A little sun came out of this black sky

now that I think about it I've never kissed you

now that I think about it

add a comment of Name for girl: Agnes. Origins, meaning and curiosities