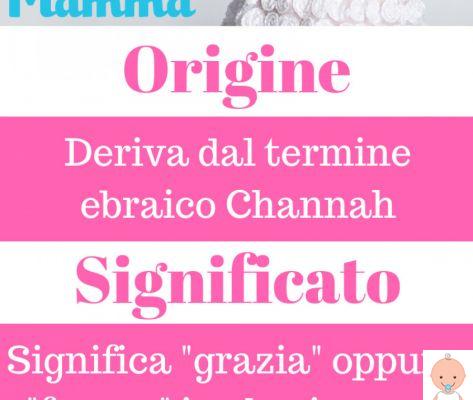 Anna is an extremely traditional female name that is very widespread in all regions and the country. In addition to the pure name there are many compound variants, such as Annachiara, Annabella, Annalaura, Annamaria, Annarita, Marianna etc ... Let's find out in this guide the origin, the meaning, the curiosities of this name for baby girl.

Most people celebrate the name day on 26 July when the Catholic Church remembers Saint Anne, the mother of the Madonna and wife of Joachim, although there are numerous saints and blessed who bear the name Anna. Sant'Anna is the patron saint of many categories, including pregnant women, widows, seamstresses, sculptors, the dying, sailors and many others and she is invoked to facilitate childbirth.

Origins and etymology of the name Anna

The name Anna derives from the Hebrew term Channah which means "grace". It is the name of the mother of the Virgin Mary and wife of Gioacchino: the two, in old age, had the grace of God after twenty years of marriage and managed to have their only daughter, whom they called Maria, which means "loved by God". In the Old Testament Anna was the mother of the prophet Samuel, while in the New Testament she was the elderly prophetess of Jerusalem who recognized the Messiah in the person of the child Jesus.

Meaning of the name Anna

The name Anna means "grace"or" favor "in ancient Hebrew, but can also be interpreted as"pretty". It must also be said, however, that some refer the name Anna to same language where it has the meaning of "mom".

Spread of the name Anna

Since Anna is a emblematic figure of Christianity it is an extremely common name since ancient times and the Middle Ages, up to today. In the twentieth century Anna, which is one of the few palindromic names, was the second most popular name in the country and it is still today among the most widespread first names in the country, in particular in the regions of Campania, Lombardy, Lazio and Puglia. According to ISTAT data, in 2022, Anna was placed in eleventh place in the ranking of the most popular names in the country with 3122 girls who have been called this way.

Anna needs to feel al safe in the family environment and he needs support and closeness from his loved ones to be able to successfully face all the difficulties he faces. AND' susceptible and a perfectionist, she risks losing her self-confidence easily and needs constant reassurance. Due to these characteristics it does not assume unnecessary risks and relies on reason and intuition to evaluate the real feasibility of a challenge before undertaking it. It has a tendency to be suspicious and she feels safe only with the people she loves and by whom she feels loved, for this reason, even if she appreciates making new friends, she is rigid and unpleasant with those who do not inspire trust in her.

His perfectionist and fussy spirit it pushes her to learn carefully from her mistakes and to do everything to excel: for her it is not enough to complete a job or reach a goal, but it is necessary to obtain the best possible results.

Therefore, he gives his whole self in what he does and does not allow himself to be influenced, he stops only when he conquers a goal by tackling all obstacles with tenacity.

Anna does not like change which she considers almost a brake on her growth, for her, in fact, having to change means above all having to start all over again, so she keeps her habits as much as possible in order to evolve and improve on an already known level.

She loves spending time with her family and does not like to get away from her loved ones, for her true happiness lies in the closest family unit.

What profession will Anna do? She will greatly appreciate engaging in the family business or will be tempted by professions in the artistic field, but also in the kitchen, in the food sector or in fields that require great precision such as the technical and medical professions.

Il Cancer is the astrological sign that comes closest to Anna's character treatises: those born under this sign are hypersensitive, determined and face enormous obstacles to make their dreams come true. But Cancer is also known for their great attachment to family and their loyalty.

Il White it is Anna's color, a symbol of perfect balance and purity. White is also associated with dividing and the idea of ​​perfection.

Anna's lucky number is 7, symbol of a continuous search for knowledge and discovery, but also of loneliness and inner completeness.

A very famous song by Lucio Battisti which did like this:

what I want more

what I want more

add a comment of Name for girl: Anna. Origins, meaning and curiosities