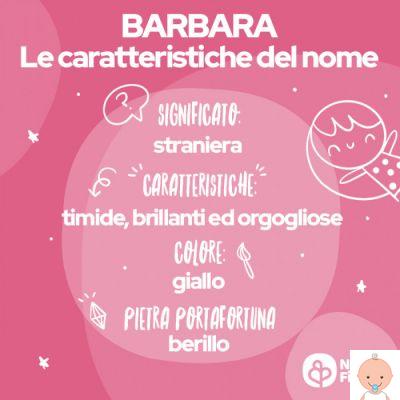 Female name of Greek origin, Barbara experienced an extraordinary success in the country at the turn of the seventies, while today it is certainly less widespread. We discover in this guide the origin, the meaning, the curiosities of this name for baby girl.

Barbara's name day is celebrated on 4th December in memory of Saint Barbara, protector of artillerymen, bomb squads and others, around whom some legends were born.

Read also: Female names for local and foreigners starting with the letter B

Origins and etymology of the name Barbara

The name Barbara derives from the Greek word bàrbaros, an onomatopoeic voice which means "stutterer", "she who cannot speak".

Meaning of the name Barbara

The meaning of the Greek term was, as mentioned, "stutterer"or" she who cannot speak "and was referred to non-Greek peoples, so by extension the meaning of Barbara soon became"barbara","foreign".

Diffusion of the name Barbara

In Roman times the name Barbara it was often imposed on slaves foreigners who arrived in the city, subsequently, thanks to the cult of Saint Barbara, the name spread particularly in a widespread way, especially in the Middle Ages.

It is a very popular name until the years Fifty in the United States (where the Barbie shape, inspired by the famous doll is also very common), but also in the country it enjoyed great fortune in the seventies: from 1969 to 1977 it was systematically placed in the ranking of 10 names more widespread in our country until reaching the second place in the top ten immediately after Maria. The trend has definitely changed and Barbara is an increasingly less common name: according to the data ISTAT in 1999 391 newborn girls were called this, while in 2022 this number even dropped to 78.

Barbara is a woman loving and affectionate, with a deep and engaging will to live. She chooses her friends carefully because she loves to surround herself only with trusted people. Sometimes she is solitaria, at times sociable and for these traits of her personality she appears very mysterious. Often, in fact, he tends to withdraw into her world to defend himself from evil and problems. Barbara loves to live by her principles and is unlikely to be persuaded to do something she is unsure of, she only acts when she is determined to do so. She knows how to be friendly and to good mood despite being often inaccessible and distant. She doesn't want to feel suffocated: she needs to live her life as she sees fit, to indulge in the activities that fascinate her and to have fun.

Endowed with great spirit critical, carefully observe the world around her before making a decision. Even if you love freedom, do not embark on any adventure without first evaluating the risks and advantages.

Barbara has an incurable optimism and never despairs in difficult times. She has confidence in herself, she is passionate and demanding.

What profession will Barbara do? Lover of nature, free from constraints and bonds, she will appreciate the freelance profession or assignments that allow her to be outdoors without time constraints.

Barbara's personality is similar to that of the natives of the Bull: calm by nature, they overcome all obstacles thanks to self-confidence.

Barbara is related to the yellow, color that symbolizes power and joy, but which also evokes warmth, friendship and affection.

If Barbara were to be a precious stone she certainly would be Emerald, a symbol of knowledge and truth.

Barbara's lucky number is 4: symbol of pragmatism, constructiveness and concreteness.

We offer you the famous "Barbara's Song" by Fabrizio De Andrè

add a comment of Name for girl: Barbara. Origins, meaning and curiosities