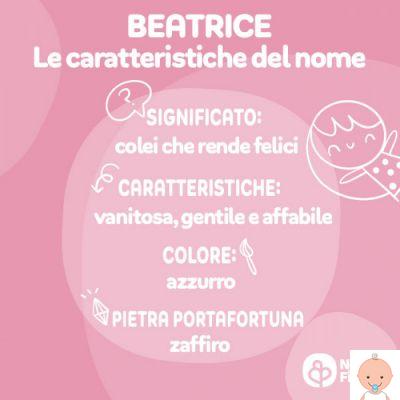 Beatrice it's a name for baby girl of ancient origins. If you are expecting a little princess and the name Beatrice intrigues you, here are the origins, the meaning, the curiosities about this name and the personality of Beatrice.

Beatrice's name day is celebrated on 18st January in honor of the blessed Beatrice d'Este daughter of Azzo IX, who died in Ferrara in the XNUMXth century.

Video: Curiosities about the name Beatrice

Podcast: the meaning and curiosities about the name Beatrice

Origins and etymology of the name Beatrice

The name Beatrice derives from the Latin term Beatrix which means "she who makes happy", "she who gives bliss", in turn deriving from Beatus (Blessed). Some other sources derive the name Beatrice a Viatrix, from Viator, that is "traveler", a very widespread name in the ancient Christian communities that with this term indicated pilgrims.

Meaning of the name Beatrice

The Latin meaning of the name Beatrice it therefore refers to the idea of ​​a person who makes one happy and blessed, but also, probably, to a pilgrim on a journey.

Diffusion of the name Beatrice

The name Beatrice it was particularly widespread in Christian communities, given its reference to the idea of ​​beatitude, but even in the Middle Ages it was a very common name, just think of Beatrice Portinari, daughter of Folco, went down in history thanks to Dante Alighieri's Divine Comedy. The name Beatrice was also chosen by many European lineages and noble families.

In 2022 in the country they were called Beatrice 2674 little girls. The position in the ranking of the most popular names oscillates between 18th and 22nd place.

Beatrice hides, under an apparent coldness, an out of the ordinary sensitivity and emotionality. She is gifted with great intuition which he uses very well in interpersonal relationships. Sometimes she is passive and lazy, sometimes she is dreamer she is limited to observing others, she is discreet and modest to the point of appearing cold, but she only tends to protect herself because she feels vulnerable and is particularly susceptible. If she has some emotional problems, she withdraws into herself and even sinks into depression. But she also has courage and determination to sell when it comes to fighting for a cause she believes in.

La personality of Beatrice it's like a puzzle, is complex, made up of two opposite vibrations: on the one hand egocentrism, isolation, reflexivity, on the other spirituality and concern for others. You have to be careful with Beatrice because she can be manipulative and under her wisdom and kindness she can hide unexpected and surprising sides of her character. AND' extravagant, but he is always in extreme need of love, affection, of the magical and the fantastic, he loves tales and legends and takes refuge in his dream world if he has to deal with a love disappointment. He loves to engage in social and creative hobbies.

In love she prefers the flavor of life as a couple, is sentimental, has a deep sense of friendship and can be an excellent counselor. He fears the solitude and this leads her to be often conciliatory and patient with others.

What profession will Beatrice make? It will certainly be tempted by all professions in the social field, in the field of communication and creativity, travel and the human sciences, especially if connected to esotericism and spirituality. She certainly hates idleness, Beatrice is a tireless worker, a strong woman, who never refuses a responsibility and is active, proud and independent.

The zodiac sign that best represents Beatrice is the Capricorn, a feminine sign, typical of determined and ambitious people, tenacious and ready to commit themselves on the front line.

The color associated with the name Beatrice is theblue, the color symbol of loyalty, transparency and idealism, as well as harmony with the environment that surrounds us.

Beatrice's precious stone is sapphire, the stone linked to spiritual research and the idea of ​​bliss.

The number associated with Beatrice is six, a number that refers to the idea of ​​expressing balance and harmony. Six represents a goal of stability achieved, both from a physical and a spiritual point of view.

Sweet Beatrice is a song sung by the American actor Adam Sandler, a bizarre and ironic text, to declare his love for the sweet Beatrice

add a comment of Name for girl: Beatrice. Origins, meaning and curiosities