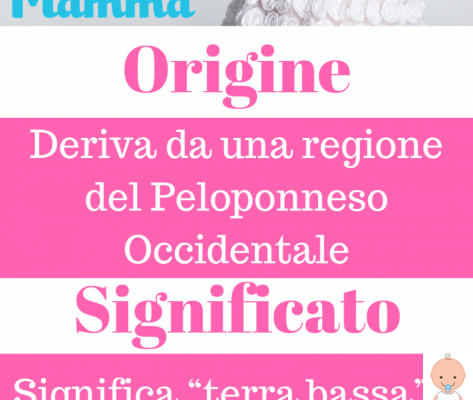 Elide is a very particular and certainly not very common female name that has an ancient origin that intrigues us and makes us want to know more. We discover in this guide the origin, the meaning, the curiosities of this name for baby girl.

Elide is a name adespota: no saint or blessed bears this name so it can be celebrated on November 1st, All Saints' Day.

Origins and etymology of the name Elide

The origin of the name Elide is not entirely clear, but there are several possible hypotheses:

Meaning of the name Elis

The possible meaning of the name varies depending on the hypothesis about the origins of the name. If we refer to the Greek region Elis, then we can connect it to the term Elis which means "low land"Or" hollow earth ", if we refer to Elios, son of Poseidon, then we can hypothesize a meaning linked to the Sun.

Diffusion of the name Elide

Not particularly popular, the name Elide is widespread especially in the regions of the northern and central el country. According to ISTAT data on the most common names in the country, in 1999 only 18 girls were called Elide, while in 2022 there were 67, confirming that the popularity of this name is gradually increasing.

Elide is a woman attractive, cheerful, open and communicative. No matter how shy and discreet she is, her personality still remains etched in those who meet her because she is capable of showing great joy and enthusiasm and transmitting positive emotions to others. She is rather reluctant to follow the rules and can upset those around her with sudden outbursts of anger, tantrums and nervousness. Elide is witty, skilful, gifted with a strong critical sense, she knows perfectly well how to use her charm and her persuasion to achieve her goals. She is very curious and emotional; she is heavily influenced by her family and she loves spending free time with her closest friends.

Elide is extremely ambitious and full of dreams that she will strive to realize with all of herself, she loves being the center of attention, making a career and growing in the job.

What profession will Elide have? He will find great satisfaction in the fields of commerce, sales, public relations and advertising, but also in crafts.

Elide's color is violet, which underlines her tendency to seek solid and secure family and emotional ties and which stimulates her creativity.

Lo Emerald it is Elis's birthstone. According to the ancients it is the strongest talisman of luck and prosperity for the individual.

Il 4 it is Elide's lucky number, because it refers to her ability to make her aspirations concrete.

Elide Suligoj was a composer and musician from the countryside who collaborated with numerous singers. This "E 'this way to not die" was set to music for Ornella Vanoni and was the B side of the single "Io, una donna".

add a comment of Name for girl: Elide. Origins, meaning and curiosities