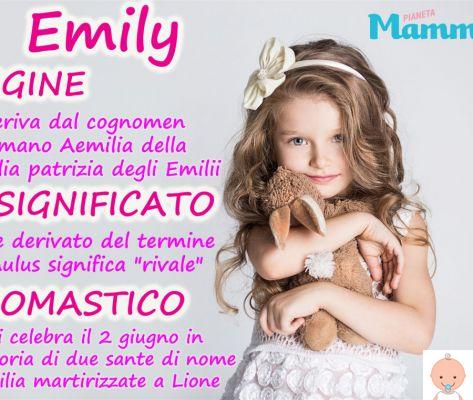 Emily is the Anglo-Saxon version of the female name el village of Latin origins Emilia. In recent years the English name has enjoyed growing popularity in the country as well and is chosen by new parents who want to give their child an international name, but still of ancient origins. We discover in this guide the origin, the meaning, the curiosities of this name for baby girl.

The name day is usually celebrated on 2nd June in memory of two saints, both named Emilia, martyred in Lyon. But you can also celebrate on other dates:

Origins and etymology of the name Emily

The name Emilia (and therefore Emily) derives from the Roman cognomen Aemilia of the patrician family of the Emilii, even if according to some front it could have Etruscan origins. The name Aemilia comes from the term aemulus, which means "rival".

Meaning of the name Emily

The meaning of the name Emilia is generally traced back to "rival"," competitor ".

Spread of the name Emily

La English form Emily of the ancient name Emilia had wide diffusion only starting from the eighteenth century when the Hanoverians arrived on the British throne. Princess Amelia Sofia was called Emily even though we know that Amelia is a completely different name from Emily.

In the country the English form Emily has become increasingly popular in recent years, according to the data ISTATin fact, in 1999 only 187 babies were called Emily but in 2022 this number has risen to 1.058. It is curious to note how instead the traditional name of the village Emilia really is not very widespread and maintain its low popularity over the years: in 1999 only 211 girls were called Emilia and in 2022 the number was 220.

Emily has a certain tendency tointroversion, and this reserve derives above all from his dreamy and profound soul. He has an intuitive spirit creative and seductive and has a tendency to daydream thanks to her overflowing imagination.

He fascinates others thanks to his sweetness and quiet nature, but also for his great affection and ability to be of help and support to those he loves. Emily, in fact, attaches great importance to family values ​​and is a source of energia for his loved ones as well as being a lot thoughtful. Despite her introverted nature, Emily is outgoing and communicative, but she doesn't always trust others. She studies people carefully before establishing a relationship based on confidence and loyalty.

Molto susceptible and emotional, Emily often has mood swings and outbursts of anger especially when she is hurt or disappointed: she does not forgive easily.

What profession will Emily be? It certainly has great ambitions and aspires to shine in the eyes of others, but is also in search of material and economic stability and is able to commit 100% to carry out his projects. You may be attracted to professions related to the world of finance and business, but also professions that require action, such as in the field of sport, or that allow you to exercise power, such asPolice officer.

Emily's character traits are similar to those of the natives of the Cancer who have an introverted nature and take their time to get to know a person before giving their trust. Both are generous and loyal and extremely attached to their loved ones.

Il blu is Emily's color. A tint that evokes her need for calm and tranquility and also reflects her sensitivity and her dreamy nature.

Emily's gem is it sapphire, a symbol of fidelity and wisdom, also associated with harmony and peace.

Emily's lucky number is 6, which evokes love, family, harmony that is sought with commitment.

Emily is the protagonist of the song See Emily Play of the Pink Floyd, from 1967, but also of two songs and the country with the same title Emily: one by Ivan Graziani and the other by Carlito.

add a comment of Name for girl: Emily. Origins, meaning and curiosities