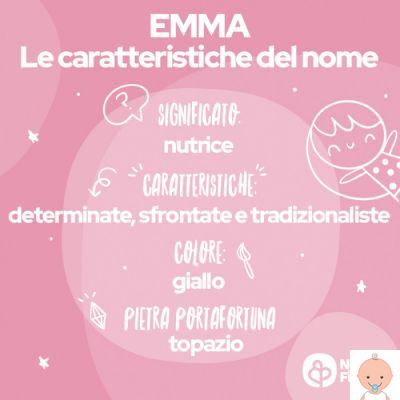 Among the names women most loved in recent years by their parents and the villagers, Emma refers to ancient origins and traditions. Let's discover together the origin, the meaning, the curiosities and the personality of whoever is called Emma.

Emma can celebrate hers name-day on various dates, in honor of different Saints:

But in general all over the world the name remains the same, and there is no male variant.

Origins and etymology of the name Emma

The origin of the name refers to a diminutive of names germanici which began with ermen (hence Ermengarda, Ermentrude or Ermenegilda), as well as Irma. But someone is certain that her origin derives from the Germanic word imme, which means valiant, industrious.

Meaning of the name Emma

The meaning of the name, if we want to accept its Germanic origin linked to the diminutive of longer names starting with ermen, is to be considered as "universal","total". While for those who do derive from the term imme the meaning of Emma is "valiant, industrious, nurse".

Spread of the name Emma

Not widespread until the Middle Ages, it found wide diffusion in England after the conquest of the Normans thanks to Emma of Normandy. In the United States for years it has remained one of the most appreciated and bestowed names on baby girls, and even in the country Emma is very much loved.

For years it has been in the ranking of the ten most popular names in our country. According to the data Istat in 1999 only 665 girls were called Emma, ​​while in 2022 the number increased to 3.690, however, undergoing a decline compared to 2022 when counted well 4971 little girls who were called in this way.

Today Emma is al seventh place of the ranking of the ten most popular female names in the country.

Emma has a character bright, bold, but sometimes a little bossy and prone to anger.

It tends to seem haughty and proud, and this is because she has great self-confidence and often dreams big. About her Yours will to succeed and reaching his goals is evident, but often the results obtained are not up to the efforts made because his mind is always a bit disordered.

E' curious, and this desire to know and to know sometimes pushes her to pass from one passion to another, from one interest to another without really deepening. She likes to change often and question everything. She dislikes monotonous life and routine, she is seeking freedom and is deeply feminist.

E' friendly, loves life and needs stable points of reference, to put his social skills to good use and not be too much egocentric and capricious.

Emma is sensitive to hers physical aspect, loves to dress well and take care of their exterior, has good taste and takes care of the house and of their belongings.

What profession will Emma make? She might be attracted to professions in finance and numbers, but also to occupations in the medical or paramedical fields, as well as those related to creativity and aesthetics.

The zodiac sign that best represents Emma's character traits is Scorpio, known for their kindness and generosity, can be very firm and determined. The Scorpio woman knows how to assert her silent and deep feelings about her and is a perfectionist and rigorous at work, but also stubborn and stubborn.

L'Orange it is the color that is most associated with Emma's personality: it reflects energy, truth, the creative spirit and is also associated with intelligence and the search for inner peace.

Emma's birthstone is the topaz, symbol of wisdom and peace. It is said that it manages to stimulate inspiration and creativity and also helps to overcome one's fears and instill courage.

Emma's lucky number is 2, which pushes us to always see the double aspect of everything, but also to want to close the circle by bringing together everything that is separate, in a constant search for harmony and balance.

"Emma's Song"is a song by the Irish singer-songwriter Sinead O'Connor, included in the 2000 album Faith and Courage

The first time I saw you

When I heart you

Give birth to you

Give birth to you

I made love to you

I made love to you

Read also: Female names for villages and foreigners starting with the letter E

add a comment of Name for girl: Emma. Origins, meaning and curiosities