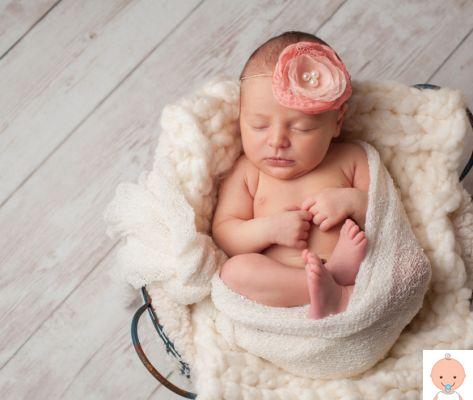 Certainly not very common, but characterized by an undeniable charm with a vintage and a bit cinematic flavor, Gilda is one of the perfect female names for those who love classic and el country names, but at the same time rare and obsolete. Let's see in this guide the origin, the meaning, the curiosities of Gilda name for baby girl.

The name is Adhespota, so it can celebrate the name day on November 1st, All Saints' Day. However, there is a Saint Gildas of Rhuys, called "the Wise" who is celebrated on January 29 and also a blessed Jildo who is remembered on September 18.

You can also celebrate the name day on June 1st, in memory of Santa Ermenegarda or Ermenegilda.

Origins and etymology of the name Gilda

The name Gilda derives from the Germanic and is a hypocoristic of Ermenegilda. According to other sources it may also be an adaptation of other names such as Hilde - German - or Gilles - French.

Meaning of the name Gilda

Spread of the name Gilda

Gilda is not a very common name nowadays. In the past you have enjoyed greater popularity thanks to the character of "Rigoletto" by Giuseppe Verdi, but also to the protagonist of the 1946 film of the same name starring Rita Hayworth.

According to ISTAT data on the most common names in the country, in 1999 only 56 girls were called Gilda and in 2022 the absolute value dropped to 27, with prevalence in the southern regions.

Gilda undoubtedly has one personality out of the ordinary which can confuse and confuse. It certainly aspires to great things, pursues ambitious projects and tries to reach important goals both from a human and a professional point of view.

Gilda knows how to be patient, determined, obstinate, sometimes even opinionated, all qualities that help her in her commitment to achieving her goals.

The road he chooses to take is not without pitfalls and difficulties and sometimes his own tenacity it can lead to extremism and fanaticism, because Gilda always tries to overcome her limits and go beyond her possibilities.

Sometimes he can openly show his contradictions: it will be hyperemotional, inspired, sensitive, impulsive, intuitive, but also dependent, impatient and naive, and will tend to immerse itself in dreams, passivity, even inattention.

At other times she will appear reserved, in control of herself to the point of seeming numb, pragmatic, suspicious and cautious, patient, with a great ability to go to work to satisfy her ambition.

Gilda is tender and sentimental, particularly careful to dedicate herself to those who love her and to the people she loves. She has a deep sense of friendship and solidarity, she knows how to be conciliatory and at times, especially in the affections, she can be excessively shy and reserved.

What profession will Gilda do? She may be tempted to devote herself to her family life and her children and to overshadow her professional fulfillment. But you will certainly enjoy jobs in the fields of psychology, childhood, accounting and marketing.

Extremely sensitive, emotional and with a certain shyness and self-doubt, Gilda's personality resembles that of those born under the sign of Cancer.

Gilda's color isOrange, born from the union of red and yellow, it symbolizes creative strength, energy and tenacity in the pursuit of one's goals.

Gilda's birthstone is there pirite. It comes from the Greek word pyr, which means fire, and helps to exorcise fears, worries and insecurities.

Il number 8 it is Gilda's lucky charm, associated above all with her ability to think big, to give substance to her projects and to achieve results that last over time.

We chose the song "Amore, amore Immenso" by Gilda Giuliani, the final theme song of the famous 1974 Grand Variety show.

Love, immense love
How immense and indescribable it is
It is to find me here next to you
Love, true love

add a comment of Name for girl: Gilda. Origins, meaning and curiosities