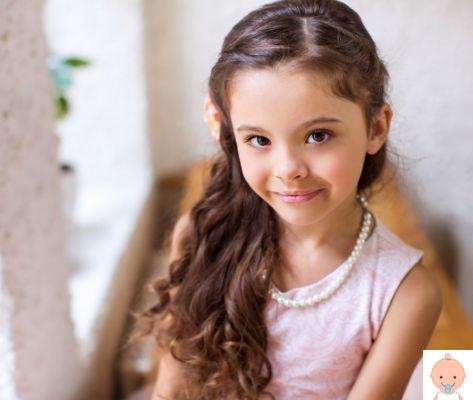 Giorgia is a delightful feminine name that has met with growing popularity among parents and villagers in recent years. If you are choosing the name for your baby, here is a guide on the origins, meaning and curiosities about the name Giorgia for little girl.

Giorgia generally celebrates the 15 February in memory of Saint Giorgia, but very often we choose to celebrate the name day on April 23, when Saint George is honored.

VIDEO: Giorgia, origin and meaning of this name

Origins and etymology of the name Giorgia

Giorgia comes from the imperial Latin name Georgia, in turn feminine form of the Greek and Byzantine Geôrgios, which means "peasant", "farmer", "worker of the land".

Meaning of the name Giorgia

Il meaning, therefore, it refers to the love for the land and agriculture "he who works the land", "peasant".

Diffusion of the name Giorgia

According to the data released by ISTAT, the name Giorgia has kept its diffusion stable over time since 1999 and remains one of the most popular names from the parents and the villagers. In 1999, 4240 little girls were called this, and in 2022 4099 new parents chose this name. In the Top Ten of the most loved and widespread names in 2022, therefore, Giorgia ranks at fourth.

Open, friendly, sociable, communicative, Giorgia is jovial and cheerful and loves to chat and integrate into her environment.

It has a great sensibility and can change emotional state easily, is intuitive and easily adapts to situations, tends to want to interfere in the lives of others, sex only with the aim of helping.

It is not always oriented towards effort, rigor and consistency, and it often shows itself capricious.

The girls are lively, joyful and curious and animate the house, but they can also be unstable and dispersive and for this reason their inclinations toaltruism and generosity.

Giorgia likes to laugh, play, have fun, create, communicate and even imagine. Giorgia looks for the happiness and is emotionally very charming, light and seductive. Her flaw is certainly jealousy and also a certain propensity to want to bully.

What profession will Giorgia make? She will probably be attracted to anything that involves human contact, because contact with the public is extremely important to her, so she can be an interpreter or deal with medicine, law, social or professions in the commercial sector.

The zodiac sign associated with Giorgia is lo Scorpio, extremely charming, captivating and seductive, but also with an aggressive component.

Giorgia's color is yellow, symbol of the purest energy, joy and vitality typical of Giorgia.

Giorgia's stone is the topaz, a stone that stimulates Giorgia's innate curiosity and her energy.

Giorgia's lucky number is four, a number that pushes us to realize our aspirations starting from what is already solid and built.

In 19030 Stuart Gorrell wrote the lyrics and Hoagy Carmichael made the music of "Georgia on my mind", the official anthem of the state of Georgia, which became famous all over the world in 1960 thanks to an exciting cover by Ray Charles.

Find out what these baby girl names mean

add a comment of Name for girl: Giorgia. Origins, meaning and curiosities