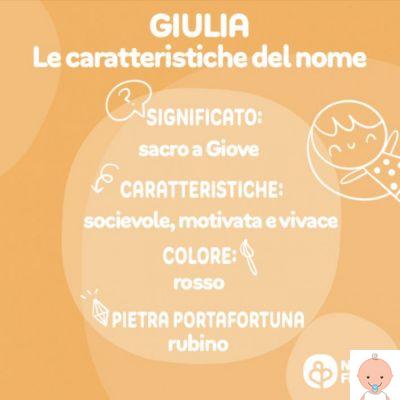 Since many years Giulia it is one of the most appreciated and chosen female names by the new parents and the villagers. Let's find out together in this guide the origins, the meaning, the curiosities about name Giulia and the personality of the girls who are called that.

Podcast: the meaning and curiosities about the name Giulia

Most people named Giulia celebrate their name day on 22st May in memory of Saint Julia, martyr in Corsica.

Origins and etymology of the name Giulia

The name Giulia (as well as Giulio) derives from the Latin Julia or Julia, that is, the feminine form of the Roman cognomen Iulius. It was the typical surname of the gens Iulia, and according to most experts it can be traced back to Iovilios or Jovilios (which means "sacred to Jupiter", or "descendant from Jupiter"). But according to some it may also derive from the Greek word ιουλος (ioulos, which means "downy", "with a downy beard", "with crinkly hair"). The names Giuliano / Giuliana also derive from the Latin surname.

Meaning of the name Giulia

According to the most accredited theses, therefore, the name derives from the cognomen Iulia which refers to being sacred to Jupiter or even a descendant of Jupiter.

Spread of the name Giulia

The name Giulia was, at the beginning of twentieth century, the most popular name in the country and has remained al first place of the ranking of female names given to baby girls for many years. Only a few years ago it was overtaken by the name Sofia which is currently the most common name in the country.

According to ISTAT in 2022 Gulia was the third most common female name with 6222 little girls who were called that.

Giulia is an extremely sociable person and pleasant, endowed with great charm even if it can be too suspicious because of her confidentiality. Often Giulia can give in to irritability, nervousness, anxiety and this shows that hers nature is twofold: on the one hand very communicative, enthusiastic, curious, full of joie de vivre; on the other, sometimes dark and shadowy, a lover of solitude.

He is able to adapt to any situation, he has a tendency to internalize their feelings and to talk more easily about frivolous things than about themselves and their deepest feelings. And this attitude might seem superficial to a careless eye.

Giulia, therefore, should be stimulated to communicate, talk, dialogue since she was a child to establish a relationship of trust and listening with others.

In his love life he will seek stability and economic security, as well as he will have a tendency to want to control the situation.

Il Gemelli is the zodiac sign that best reflects Gulia's personality. Those born under this sign are sociable and love human contact, make new friends, enjoy the company of friends and family, but sometimes they tend to isolate themselves.

Il red is Giulia's lucky color. It can reflect love, sensuality, courage and at the same time it can refer to anger, danger and prohibition.

Il ruby it is Giulia's lucky stone: the most precious stone in the world because it is rarer and more expensive than diamonds: a stone that would bring wisdom and good health.

Giulia's lucky number is 4, which refers to the idea of ​​practicality, construction, solidity.

There are numerous songs that we can dedicate to Giulia, from "Brava Giulia" by Vasco Rossi, to "Giulia" by Fabio Concato and Antonello Venditti up to "Dedicated to you (Giulia)" of the Vibrations of which we propose the video.

add a comment of Name for girl: Giulia. Origins, meaning and curiosities