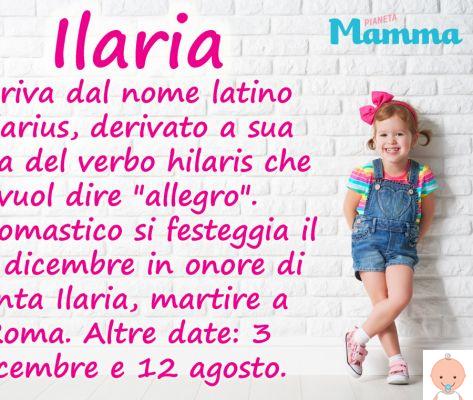 Ilaria is a name that immediately conveys the idea of ​​happiness and joy. Let's find out in this guide the origin, the meaning, the curiosities of this female name.

Origins and etymology of the name Ilaria

Ilaria comes directly from the Latin name Hilarius, derived from the verb hilaris which means "cheerful".

Meaning of the name Ilaria

There is no doubt about the meaning of the name Ilaria, which means hilarious, cheerful, joyful.

Diffusion of the name Ilaria

Ilaria was particularly appreciated a few years ago, while today it is less popular. According to ISTAT data, in fact, in 1999 they were called Ilaria 2759 neonate, while in 2022 this choice was made just over thousand neogenitori.

Also appreciate the variants Hilary or Hillary, while it should be emphasized that the choice of the variant Ilary (in vogue thanks to the showgirl el paesena Ilary Blasi) is growing: in 2022 more than two hundred newborn girls were called Ilary.

Kind, friendly, emotional and sensitive, Ilaria loves the quiet life and "safe navigation" and gives the impression of calm and sweetness.

It is very influenced by the environment and if it does not receive the right stimuli it can be not very dynamic and enterprising and prefers to procrastinate, abandoning itself to laziness.

As a child Ilaria is lovable, affectionate and kind, but the parents of little Ilaria must still be firm with her to transfer the importance of the concept of work, order and discipline to her.

It has a tendency to live more i dreams of reality, its strengths are its charm, kindness, availability, camaraderie, intuitive ability. She likes to escape with her mind, fantasize and enjoy life and peace. She loves to travel because travel satisfies her desire for adventure and discovery. Much affectionate with your partner and with a great sense of family.

What profession will Ilaria do? Parents and the family environment will play an important role in choosing Ilaria's career path because she does not always manage to be determined: she could work with her parents (for example in the family business) or choose not to work and be a full-time mother, otherwise she could choose a socially useful profession, perhaps with children, or in public administration.

The sign closest to Ilaria's character is that of Aries: always looking for new projects and new dreams to pursue.

Il red is the color associated with Ilaria: a symbol of passion, great personality and self-confidence.

Ilaria's birthstone is the ruby, symbol of wisdom and good health.

Three is Ilaria's lucky number: a symbol of great strength and inner power.

Ilaria is a song by Gigi D'Alessio from 2006: the song tells of the moment in which Ilaria confesses to her father that she is in love.

add a comment of Name for girl: Ilaria. Origins, meaning and curiosities