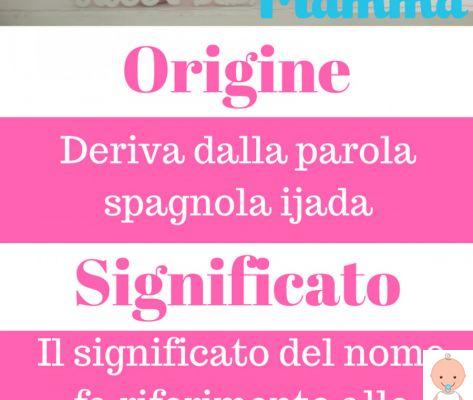 Giada is a female name that enjoyed great popularity throughout Europe in the twentieth century. Until a few years ago she was among the top ten names in the country and even if today her diffusion has decreased, she is still a name particularly appreciated by the new parents and the villagers. We discover in this guide the origin, the meaning, the curiosities of this name for baby girl.

The name is adhespota, there are no saints called Jade, so the name day can be celebrated on November 1st.

Origins and etymology of the name Giada

Giada is an affective name, that is, it has no ancient origins but derives from the Spanish word ijada, taken from the expression piedra de la ijada.

Meaning of the name Giada

The Spanish expression piedra de la ijada means "flank stone”And refers directly to the alleged therapeutic properties of this stone against kidney diseases. There giada it is therefore one Stone which has a color that can have different shades of green.

Diffusion of the name Giada

Virtually absent in the country until the second decade of the twentieth century, the name Giada then experienced a moment of great popularity, especially at the turn of 2004-2006, when it ranked tenth in the ranking of the most popular names in our country.

Deeply passionate e determined in what she does, Giada has many qualities including reliability, fidelity, extroversion. Extremely sociable and communicative Giada has a jovial nature, loves life and likes to enjoy the pleasures it offers, especially the simple ones related to nature.

Jade has a keen sense of observation and ability to listening and that makes them people who can be trusted: they generally give good advice and inspire trust in others.

Giada is one fighter, perseveres in the attempt to reach the goal, she likes to fight by any means to win the battle. She is not interested in simple and mundane challenges because she loves novelty.

Known for her dynamism and ability to adapt to different situations, Giada manages to live many different experiences with enthusiasm and creativity.

Giada does not hesitate to show firmness and obstinacy when it comes to having to defend her own opinions and does not give up her ideas, however extravagant they may seem in the eyes of others.

However, even if it always seems bursting with energy and will to live, sometimes Giada goes through moments of anxiety and nervousness that he often manages to keep under control by living in a frenzy. Giada's life flows, therefore, to the search for stability in some moments and, at the same time, of change and movement in others.

What profession will Giada make? Any listening and counseling activity will fascinate her. But you can also excel in the tourism, marketing and culture sectors.

L'Ram it is associated with the personality of Jade with which it shares several characteristics, such as obstinacy and their undeniable extroversion.

Jade is influenced by color green, symbol of nature and of the stone from which it takes its name. A color that indicates the hope and the rather developed spirituality of Jade.

Lo Emerald is the precious stone of Jade. Symbol of wisdom, this gem helps to channel internal and external energies.

Giada's lucky number is 2, symbol of listening and openness to others.

"Jade and the thousand experiences" is a song by the singer-songwriter from the village Francesco Sarcina.

add a comment of Name for girl: Jade. Origins, meaning and curiosities