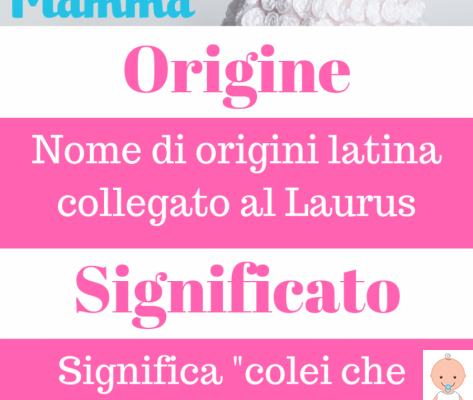 If we want to fish, in the list of female names, a poetic, traditional but very little common name, Laura may be the right choice. We discover in this guide the origin, the meaning, the curiosities of this name for baby girl.

The name day is celebrated in most cases on 19 October when it is remembered Saint Laura, widow and martyr in Cordoba in the year 864, but there are also other saints who bear this name and as many dates on which the name day can be celebrated, such as:

Origins and etymology of the name Laura

Laura is a Latin name related to the Laura, the laurel, the tree sacred to the god Apollo, who according to the myth transformed the nymph Daphne into a laurel plant.

Meaning of the name Laura

In Latin culture, laurus was a symbol of glory and wisdom. The Latin name Laurea, then transformed over the centuries into Laura, means she who wears the laurel wreath, which was placed on the heads of victorious leaders and poets, and in the Christian era on the heads of martyrs. Etymologically Laura, therefore, is similar to the name Lorenzo.

Spread of the name Laura

The name Laura spread significantly in the imperial era and, subsequently, especially in the Middle Ages. In the town, Laura sung in the Canzoniere di Francesco Petrarch.

In the twentieth century Laura was, on the whole, the 14th most common name and in the first decade of the twenty-first century it underwent a sharp decline in popularity also testified by the ranking of the most popular names in the country of the ISTAT: in 1999 2829 newborn girls were called Laura, while in 2022 there were only 620 with a continuous downward trend .

Laura loves hers freedom and defends it with all his strength. AND' independent, she does not like to submit to others because she does not tolerate pressure well. You have excellent skills leadership, she is honest, charismatic, understanding and always manages to solve the problems of those around her.

Laura hates routine, does not hesitate to do several things at the same time and dedicates herself with all her soul and energy to the projects she chooses to carry out. You have an innate optimism which allows her to face every challenge with the right spirit and to achieve the goals she had set for herself.

It always has an air happy, sows good humor wherever she goes, is enthusiastic and always ready to embrace new projects and new challenges. It's a lot intelligent and prefers to carefully evaluate situations before jumping headlong into a project. He always has his feet on the ground, he does not venture into impossible challenges, he has a strong sense of diplomacy and is very protective of those she loves.

What profession will Laura do? Since she has an extremely free and independent spirit, in any field Laura will try to emerge, become independent and become the boss.

Il Sagittarius is the zodiac sign that best defines Laura's personality. Those born under this sign are famous for their great kindness, they are tireless and ambitious workers.

Il violet it is Laura's color, a symbol of softness, dynamism, but also associated with melancholy and loneliness.

Laura's birthstone is the Topaz, a gem that, according to the ancients, is capable of eliminating sadness.

Laura's lucky number is 3: symbol of creativity and development of the intellect, as well as the ability to develop new projects thanks to knowledge.

We chose "Canzone per Laura" by Roberto Vecchioni

add a comment of Name for girl: Laura. Origins, meaning and curiosities