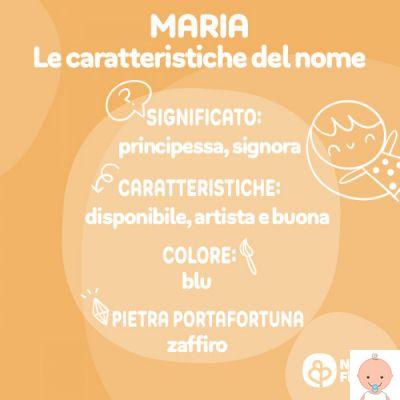 Feminine name par excellence, Maria retains its charm and power intact. A simple but never banal name that can also be declined in infinite variations by adding another name next to it. We discover in this guide the origin, the meaning, the curiosities of name Maria for baby girl.

The name day is celebrated on September 12th, the day of the feast of the Most Holy Name of Mary, but you can also celebrate theSeptember 8th, feast of the Nativity of the Blessed Virgin Mary.

The wide diffusion of the name Maria has given life, over time, to one infinite variety of hypochoristic, diminutive and variant, many of which have become names in their own right - as is the case with Miriam, for example, but also of Mariella, Marietta etc ..

It should also be noted that the name Mario it is not the masculine variant of Maria, because it has a different etymology and origin: the feminine of Mario is Mary.

Origins and etymology of the name Maria

Maria derives from the Hebrew Miryam, transformed into Greek as Mariam and arrived in the country as Miria: the Latin form of the biblical Greek Maria is the last step. The interpretations and possible hypotheses on the etymological origin of the name Mara are numerous, we propose the most accredited ones:

Meaning of the name Maria

Of course, even as regards the meaning of the name there is still a lot of uncertainty today. We can say that Mary can mean:

Spread of the name Maria

Maria is the most common name in Europe, also considering its variants and forms combined with other names. Certainly its extraordinary popularity is due to the fact that Maria is the name borne by the mother of Jesus, therefore the devotion and the planetary cult towards the Madonna have favored the spread of the name. In our country in the twentieth century it was the most widespread female name, also including the combination of Maria with other female names: Maria Francesca, Maria Vittoria, Maria Antonietta etc ...

It should be remembered that in the village the use of Mary as middle male name it is the only exception provided for by the law as regards the prohibition of attribution of a name other than the gender of birth: therefore, the Carlo Maria, Antonio Maria etc ..

Introverted and reserved Maria is shy and discreet, she often questions herself and life, she appreciates calm and tranquility and loves solitude. AND' hypersensitive, she can't stand conflicts, she avoids disputes and quarrels as much as possible, she is fragile and very emotional.

Maria is one dreamer, often tends to escape the harsh reality to take refuge in his inner world. She attaches great importance to friendship and solidarity but is attracted only to lasting and sincere relationships, she is very selective and offers her friendship only to people who inspire trust.

Maria is generous, selfless, always ready to help, she is famous for her dedication to those she loves. Her sweetness and her availability attract the sympathy of those around her. She has a great ability to listen and understand, she has a great sense of responsibility and a sense of duty.

Sometimes is nervous and insecure, he easily doubts his abilities and for this reason he thinks a lot before making any decision. She is intuitive, but she is gifted with exceptional analytical skills and a strong critical thinking, Maria is more attentive to inner beauty and wisdom than to appearance, she is distinguished by her aversion to superficiality and mediocrity.

What profession will Maria make? Maria has a passion for art, especially for music and painting, she has a great creativity that will put at the service of her profession. You will find gratification in the field of psychology and communication.

The zodiac sign that best defines the character traits of Mary is that of Pisces. The native of this sign is known for his vivid imagination, but also for his sensitivity and hyper emotionality.

The color linked to Maria's personality is the blu, which evokes wisdom, knowledge and meditation.

Symbol of wisdom and fidelity, it sapphire it echoes Mary's loyalty in her loving relationships. Furthermore this stone also evokes truth, trust, peace and harmony.

Il number 7 it refers to the search for inner perfection and inner analysis and therefore evokes the continuous questions that Mary asks herself as well as her analytical mind.

There are so many songs, el paesene and foreign, dedicated to Mary. We have choosen Maria, Maria of Santana

add a comment of Name for girl: Maria. Origins, meaning and curiosities