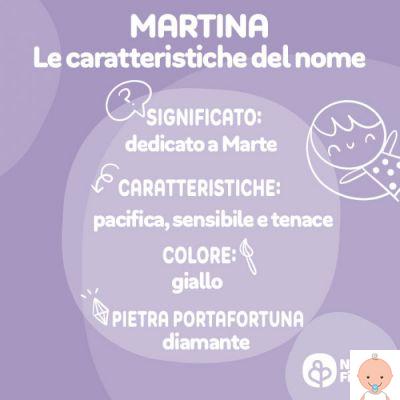 Martina is a name of Latin origin that has been at the top of the most used names in the country for many years. A sweet, feminine name for a girl who never ceases to please the new parents and which has been increasingly appreciated, starting from the Middle Ages, thanks to the cult of Saint Martin. We discover in this guide the origin, the meaning, the curiosities of this name for baby girl.

Martina celebrates the name day on 30st January, in honor of Santa Martina, deaconess, martyr to the city under Alexander Severus.

Podcast: the meaning and curiosities about the name Martina

Video: Origins, meaning and characteristics of who is called Martina

Origins and etymology of the name Martina

The name Martina comes from the Latin supernomen Martina, hence the female variant of Martinus which was based on the name of the roman god mars (in Latin Mars, the god of war). The term Martis, genitive of Mars, therefore meant "sacred to Mars", "dedicated to Mars".

Meaning of the name Martina

Returning, therefore, to its Latin origins and to the connection with the name of the god Mars, Martina, as Martin means "sacred to Mars". In some places it is used as a diminutive of the name Marta, but from the etymological point of view the two names have nothing in common.

Diffusion of the name Martina

As we said starting from the Middle Ages, thanks to the cult of Saint Martin, bishop of Tours, in France, the name has spread more and more in Europe. In the country the unstoppable rise of the name Martina started from the years Eighty thanks to the great popularity of the American tennis player, of Czech origin, Martina Navrátilová.

Looking at the ranking of the most used female and male names in the country, according to ISTAT, from 1999 onwards, Martina has always remained in the top ten female names most chosen by parents and villagers. Some curiosities:

Martina is a woman who loves to leave a lot of space for her own emozioni, she is generous and selfless, but at the same time she can become jealous and a little aggressive. This strong emotionality and ambivalence of her character can sometimes be a bit difficult for those around her to understand and manage. AND' stubborn and does not hesitate to express her opinion and her disappointment when something does not convince her.

Martina is a woman courageous, with a great willpower and does not hesitate to commit to achieving his goals, thanks to his stubbornness, and does not give up even in the face of failure.

She loves to devote herself to others, is very hardworking and bases her life on strong and ingrained moral values ​​which, at times, can prevent her from thinking outside the box and from venturing into aspects and adventures she does not know. This is why she loves to build one safe and stable personal and family life: he is constantly looking for ace and a stability that can reassure him.

E' self-confident and she knows how to seduce and fascinate those around her, even if at times she can appear excessively authoritative and decisive. It's a person passionate of what it does, active that does not hesitate to assume its responsibilities.

What profession will Martina make? Thanks to her qualities she will prove to be a great one working, perfectionist and perceptive, able to manage, organize, administer. The economic aspect is important to her, but she will still choose a profession that satisfies her and also gratifies her emotionally. You can be an excellent teacher, social worker, psychologist, but also a doctor or make a career in the banking and commercial sector.

Martina's astrological sign is that of Virgin, which best matches his character traits. Pragmatic, perfectionist, realistic, concrete, able to fully commit to its tasks and to achieve its goals.

Martina's color is blu, a symbol of peace and fulfillment which are the main goals that Martina sets in her life.

Martina's birthstone is theamethyst, a colored gem flies perfect for those who do not like to take fancy flights and prefer to remain anchored to reality in achieving their goals.

Martina's lucky number is8, considered the most perfect symbol of cosmic, and therefore personal, balance.

"Martina" is the title of a famous song by Baustelle

add a comment of Name for girl: Martina. Origins, meaning and curiosities