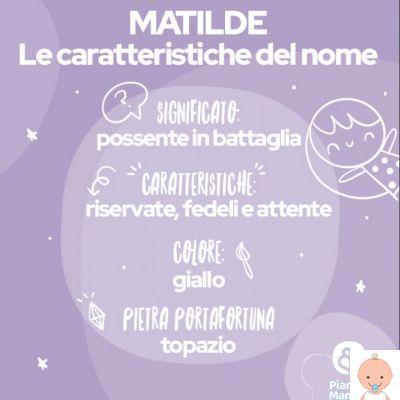 Matilda it is certainly a name that has mixed fortunes, for years it has been much appreciated and used, for some time, however, it has been less widespread. It sure is a historical name, which refers to an idea of ​​sophisticated and noble femininity. If you are considering choosing the name Matilde for a little girl here is a complete guide on the origins, the meaning, the spread, the curiosities and the personality of those who bear this first name.

Matilde's name day is celebrated on 14 March, in honor of Saint Matilda of Ringelheim, or "of Germany" or "of Saxony", queen and mother of Emperor Otto. But there are also other dates on which the name day can be celebrated, in honor of other saints, such as11th April, for blessed Matilde, of Scottish origin, or the 17 December, for Blessed Matilde Téllez Robles, or Matilde of the Sacred Heart, founder of the Congregation of the Daughters of Mary Mother of the Church.

Origins and etymology of the name Matilde

The origin of the name is Germanic and it literally means “She who fights with force". We follow the evolution and spread of the name over the centuries.

Meaning of the name Matilda

The name derives from the Germanic Mahthildis and is composed of the words maht, or macht, mahti, which means "strength", "power" and hild, or hildi, "battle". So the meaning of the name Matilda can be summarized in: strong warrior, or powerful in battle.

Diffusion of the name Matilde

In the village they are called Matilde 41045 people, is the 271st most common female name and is chosen above all by parents who live in Lazio, Campania and Lombardy.

"She who fights with force ", therefore - the meaning of the name Matilde - refers to an extremely strong, firm and enterprising personality. She is very loyal to her family and friends and dedicates herself to them in case of need, dedicating herself entirely, but she does not hesitate to fight her enemies. Basically Matilde is a person whose personality pushes her to love her or to hate her, without half measures. And in the same way, she can be extremely and totally devoted to the cause she embraces or to the people she loves, or combative and courageous against those who want to harm her.

Furthermore, Matilde is an excellent counselor, capable of listening to those in need, she does not like to talk about herself and is rather reserved. She has a noble and attractive personality, while remaining simple. She is perfectly capable of keeping her emotions in check and she hates lightness and mediocrity. She is a perfectionist and idealist, ambitious and hardworking. She is a bit conservative and she keeps her feet on the ground, ready to take on her responsibilities with poise and efficiency.

The sign associated with the name Matilde and which best represents it is the Lion, a figure that refers precisely to the idea of ​​strength, courage, pride and determination that are its own.

The color associated with the name Matilde is yellow. A bright, energetic color, full of light that refers to an idea of ​​elegance, but also of vivacity and beauty.

According to ancient tradition the topaz is the precious stone connected to the name Matilda. Topaz is linked to truth and the ability to forgive, to hope, happiness and true friendship. According to tradition, wearing it helps you become more aware of yourself and your feelings and emotions. Gold is a metal associated with this name.

The lucky number of people named Matilde is the 9, symbol of fulfillment and completeness, as well as of great intuition.

Find out the meaning of baby girl names:

add a comment of Name for girl: Matilde. Origins, meaning and curiosities