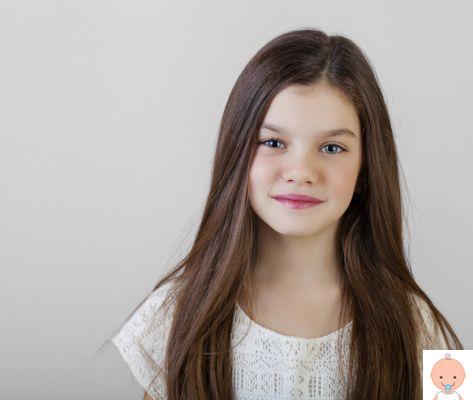 The female name Noemi is becoming more and more popular in the country in recent years, so much so that it ranks among the twenty female names more widespread in 2022. Let's discover in this guide the origin, the meaning, the curiosities of this name for baby girl.

Although a saint Naomi is often found online, remembered on 14 or 15 December, in reality there is no figure with this name in the list of saints. So we can say that Noemi is a nome adespota and his name day is celebrated on All Saints' Day, the 1 November.

Origins and etymology of the name Noemi

The name Noemi derives from the Hebrew term Na'omiy, Nō'omî, which then transformed into Noemìn, in Greek, and subsequently into Noemi, in the Latin vulgate. It is a name of biblical tradition because her name was Naomi, Elimelech's wife and Ruth's mother-in-law, who later changed her name to Mara, which means unhappy, after the death of her husband and children.

Meaning of the name Noemi

Probably the meaning of the name Noemi can be traced back to the Hebrew noun no'am, which means "sweetness", "delight", "joy", oa n'm which means, "to be appreciated". So according to popular tradition Noemi means "my joy".

A separate note for the English variant Naomi, which coincides with the Japanese name composed of the no (correct) and my (bella).

Spread of the name Noemi

In ancient times the name was quite common in the Jewish communities given its presence in the Old Testament, only later did it begin to be popular also in Christian circles. In the country, however, it is a relatively recent name: it has only begun to spread in recent years and its popularity is increasing. According to the data ISTAT in 1999 Noemi 1818 girls were called, while this number rose to 2022 in 2293. Currently Noemi is at eighteenth place of the ranking of the most popular names in the country.

Noemi has a shy and reserved character. She has a developed critical sense and extraordinary analytical skills which, together with her natural introversion, push her towards spiritual and philosophical interests. Although she has a tendency towards isolation, Noemi considers friendship is sacred and does not waste time with superficiality and hypocrisy. It's a lot selective in friendships, but once connected with a person expresses fidelity, affection and generosity for life. She has a capacity of dedication towards the other that pushes her to devote herself to loved ones and to make enormous sacrifices to ensure their happiness.

He does not like to rely on emotions and feelings, he shuns conflicts and when he finds himself in difficulty he tends to withdraw into himself. You therefore need a big one family serenity and balance because conflicts, tensions and anxieties undermine his well-being.

He has a tendency to ask himself existential questions, to which he constantly seeks answers. He has a utopian vision of the world and when he collides with harsh reality he can suffer greatly.

What profession will Noemi make? You will be attracted to the avant-garde scientific world but also to the philosophical professions, psychology or religion.

Il Capricorn is the zodiac sign that comes closest to Noemi's character traits: shy, reserved, he prefers to hide in a corner rather than face a controversy. Also known for his total dedication to family and loved ones, Capricorn loves to surround himself only with loved and reassuring people.

The color associated with Noemi is the black, which represents precision and helps solve the most complex problems thanks to a careful and in-depth analysis.

Noemi's precious gem is the garnet which encourages meditation and strengthens the spirit, helping to fight melancholy and sadness.

Noemi's lucky number is 7, emblem of perfection and maximum organization.

We propose the song "Good morning to life"written by Fabrizio Moro for Noemi, who became famous after his successful participation in the X-Factor TV show.

now aware of every past mistake

that gives off splendor

we will be energy and heat and heat

add a comment of Name for girl: Noemi. Origins, meaning and curiosities