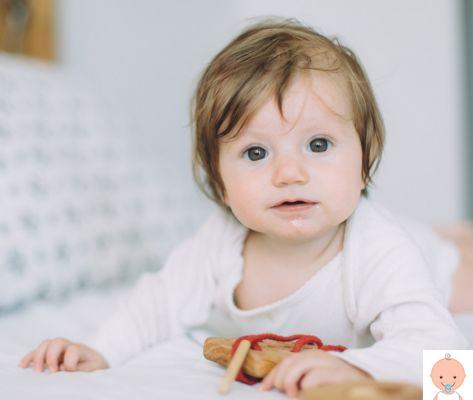 Rebecca is an ancient female name of origin biblical with an uncertain meaning that is enjoying great popularity in recent years in the country. We discover in this guide the origin, the meaning, the curiosities of this name for baby girl.

Most people celebrate the name day on September 23th in memory of Rebecca, wife of Isaac, mother of Jacob and Esau, which is also celebrated on December 24, together with the other ancestors of Christ from the Old Testament.

There are no variants of the name Rebecca and there are no masculine variants.

Origins and etymology of the name Rebecca

From the etymological point of view, Rebecca has an uncertain origin, undoubtedly derives from the Hebrew Rivqah or Ribqah, and could have a Semitic root rbq with the meaning of "unite".

Meaning of the name Rebecca

The meaning can be to bind "," unite ", but also, in a broader sense, of connection".

Diffusion of the name Rebecca

The name Rebecca it has always enjoyed a certain popularity in Jewish circles and in Anglo-Saxon countries, but rarer in the country where, however, in recent times it has seen a rise in the approval rating among new parents and villagers.

Rebecca has a strong personality and does not go unnoticed: it stands out above all for its character impulsive d expansive. She is gifted with great communication skills, she is sociable and enthusiastic. Strongly attached to hers freedom and independence, Rebecca easily seduces those around her and has no difficulty in making new friends. She hates living under constraints and is refractory to authority: she has a big heart, she is generous and loves to help others. She is always ready to face new challenges, she is combative and energetic and hates fiction and lies.

He does not allow himself to be discouraged by failures or difficulties and pursues his goals with tenacity and vigor.

Bold, passionate, dynamic, Rebecca knows how to harness her potential to achieve her goals. Her warrior and enterprising spirit pushes her to want to aim higher and higher to take on new challenges.

The zodiac sign that best resembles Rebecca is that ofRam which stands out for its great liveliness and energy. Those born under the sign of Aries are very active and do not like monotony, and are determined and combative.

Il red it is the color that best suits Rebecca's personality and recalls her passionate and combative temperament.

L'agata is the precious stone attributed to Rebecca: this gem strengthens her determination and her fighting spirit.

the 3 is Rebecca's lucky number: it symbolizes communication and sociability.

We offer you a piece of Gianna Nannini titled "Rebecca" contained in the album "Radura".

add a comment of Name for girl: Rebecca. Origins, meaning and curiosities