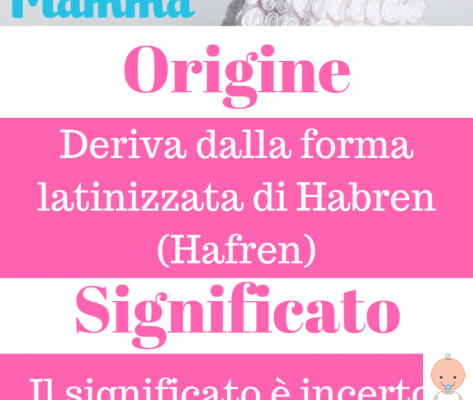 Among the most loved and popular female names a few decades ago, Sabrina is less popular today but perhaps for this reason it can be the right choice if you are expecting a baby. We discover in this guide the origin, the meaning, the curiosities of this name for baby girl.

Origins and etymology of the name Sabrina

The name Sabrina most likely derives from the Latinized form of habren (Hafren), the original Welsh name for the River Severn. Etymology and meaning are however uncertain. We can assume that the name is composed of the roots samo (summer) and renwo (fast).

Meaning of the name Sabrina

As we said the meaning of the name Sabrina is uncertain. Taking as valid the theory that it derives from the proto-Celtic roots samo and renwo, then it could mean "quick summer”, But some are certain that Sabrina has Jewish origins and therefore derives from the Hebrew term Sabra which indicates a Jew from Israel, or from Sabrae, fruit of the cactus.

Diffusion of the name Sabrina

In the country and in the Anglo-Saxon countries they have contributed to the widespread diffusion of name Sabrina especially the play by Samuenl A. Taylor, Sabrina Fair of 1953 as well as the famous film based on the opera Sabrina, with Audrey Hepburn. Until a few years ago Sabrina was a very popular and appreciated name in the country, while today it is decidedly less used: according to ISTAT data on the most common names in 1999 Sabrina was called 1296 girls while in 2022 there were only 269.

Sabrina is a determined, active, energetic person who hardly gives up fighting for what she believes in. She loves to be autonomous and independent and has a large capacity of leadership. While she has no difficulty in openly declaring her independent nature of her, Sabrina still tends to be conciliatory, to seek the right compromise and to mediate in a dispute.

Its true force, however, it is theambition: she is obstinate, determined, ready to give the best of herself to achieve her goals, Sabrina is also capable of good feelings and knows how to be generous, caring, sensitive. She is distinguished by the strength of her personality and sometimes she hides her emotional vulnerability behind a mask of false indifference.

Another of Sabrina's peculiar traits is hers need to please, to be admired: Sabrina attaches great importance to the image and for this reason it might seem a little superficial.

In short, Sabrina has one complex personality which borders on contradiction and perhaps for this very reason it is fascinating and interesting.

What profession will Sabrina do? She certainly shows a keen interest in science and all forms of knowledge, she is curious, loves to read, to learn and also to experiment. Her leadership skills make her perfect for companies looking for charismatic and determined executives or leaders. You may also be attracted to the world of commerce and business.

Aries is the zodiac sign that comes closest to Sabrina's personality: obstinacy, dynamism and enthusiasm. Like the natives of Aries Sabrina is sociable and combative.

The color associated with Sabrina's personality is blu. Symbol of intelligence and wisdom, also linked to serenity and tranquility.

Sabrina's birthstone is it Emerald symbol of love, hope and realization of projects.

L'1 it is Sabrina's lucky number, a symbol of determined, independent individuals driven by a strong will to assert themselves.

add a comment of Name for girl: Sabrina. Origins, meaning and curiosities