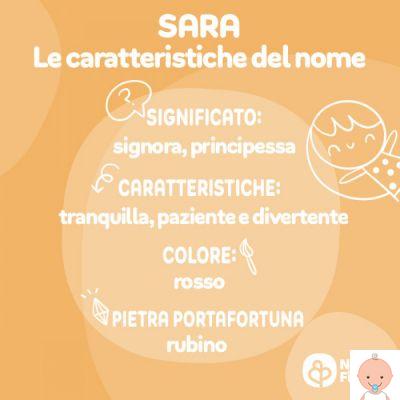 Of Jewish origin and biblical tradition, Sara it's a name for baby girl always highly appreciated by parents and the villagers. She was called Sarah the wife of Abraham and mother of Isaac and different variants are found in numerous languages. Suffice it to say that Sara is one of the most popular names in the country in the twenty-first century and Sarah remains one of the most common female names in Anglo-Saxon countries as well.

Sara celebrates the name day on 20th April in memory of Saint Sarah, martyr in Antioch. The biblical Sarah, wife of Abraham, is remembered, however, only by the Coptic Church on 19 August.

Origins and etymology of the name Sara

In the Bible the name was originally Saray, which probably meant "litigious"and was changed by God.

Some of Sara's variants are homographs with other names. A few examples:

Meaning of the name Sara

Diffusion of the name Sara

According to the ISTAT surveys Sara is one of the most popular names Thanks to the fact that many sovereigns and saints have borne the name Ludovico, the name is particularly widespread in the country in the twenty-first century:

Despite the constant appreciation that new parents and villagers have always reserved for this name, in recent years there has been a decline: in 1999 7186 newborn girls were called Sara, while this number fell, in 2022, to 2976.

Sara has a character Dolce and feminine, she is gifted with great sensibility and for her the affection and presence of the people she loves are very important. She apparently she may seem distant and cold but only because she is shy and reserved, often silent and discreet and does not like to attract attention.

He always makes good use of his insight and intelligence and she likes to be appreciated. Sometimes, especially because of her shyness, Sara runs the risk of not having confidence in herself and giving too much importance to the opinions that others have of her. However in unexpected moments she succeeds in affirming hers personality that manages to emerge beyond shyness. It's a lot susceptible and does not hesitate to express anger and aggression when it comes to defending their ideas where he deems it necessary. Behind the fragile and permissive air hides a strong spirit that allows her to deal with courage and tenacity against adversity and to commit himself with great rigor in achieving his goals. Sara is meticulous and a perfectionist when she is called upon to perform a task.

What profession will Sara make? She has an excellent memory, an extraordinary ability to complete tasks with precision and commitment and is very attracted to the humanities, such as sociology, pedagogy, psychology.

Il Lion is the astrological sign corresponding to Sarah's personality: her main qualities are, among other things, honesty, loyalty, generosity and perseverance.

Sara's number is 2, a symbol of a deep feminine energy and the ability to establish constructive interpersonal relationships.

The color related to Sara's temperament is the red which expresses the passion and courage that animate Sara.

The gemstone associated with Sara's nature is the ruby, a gem capable of neutralizing negative thoughts and symbolizing victory and passion. Furthermore, the ruby ​​favors the realization of projects because it stimulates perseverance.

"Sara" is a song by Pino Daniele who in 2001 dedicated this song to his daughter.

Break your games against

arrogance of the world

which is full of

Useless things to do

How many useless things

we have in the head

but your smile remains

add a comment of Name for girl: Sara. Origins, meaning and curiosities