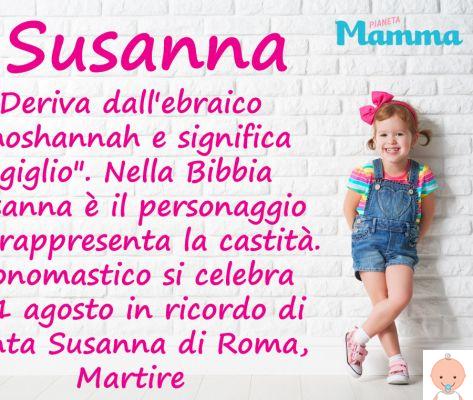 Susanna it's a name very common female, in its Susan variant, in Anglo-Saxon countries, but with a long tradition also in our country. We discover in this guide the origin, the meaning, the curiosities of this name for baby girl.

Susanna usually celebrates her name day on 11 August in memory of Saint Susanna of the city, martyr in Coazzo in 295

There is no male variant

Origins and etymology of the name Susanna

The name Susanna derives from the biblical Greek Sousanna, which in turn has its origins in the Hebrew shoshan.

From the etymological point of view, therefore, Susanna is based on the Hebrew term shoshan which was a derivative of the Egyptian root ssn, "lotus".

Meaning of the name Susanna

The name Susanna means "lily" (symbol of purity par excellence), taking up its ancient Hebrew meaning. In the Bible Susanna is a chaste and innocent woman unjustly accused of adultery who was, however, forgiven by the prophet Daniel.

Spread of the name Susanna

As we said in the United States and in general in Anglo-Saxon countries, the name Susanna has always enjoyed great popularity to the point that in the period between 1957 and 1960 it was firmly placed in second place in the ranking of the most common female names. In the country this name is no longer as widespread as half a century ago and its popularity is not increasing, far from it: according to ISTAT in 1999 they were called Susanna 266 little girls, while in 2022 only 93 little girls were called that.

Behind his apparent coldness and stability in the soul of Susanna there is a big one sensibility which she protects using a kind of indifference to the world. Susanna is certainly a woman strong and courageous which may appear arrogant, also because it is constantly looking for its independence and autonomy.

It has a character susceptible, complex and a sometimes contradictory personality that makes her unpredictable and capable of showing great anger, also because she does not like half measures.

Unselfish and sensitive towards others, Susanna fights against injustices and in defense of those who find themselves in difficulty, actively participates in the activities of her community and is curious about everything concerning the spiritual aspect of life.

What profession will Susanna make? She is a perfectionist and fights hard to achieve her goals: she despises inactivity while she is always ready for action. She has a great and deep sense of responsibility, a strong self-esteem and a certain and organizational capacity that make her perfect for holding any position of responsibility. She will prefer the freelancer which will allow you to better organize your time and your commitments. You can become a doctor, a social worker, a psychologist.

The zodiac sign that is most in line with Susanna's character is the Bull: those born under this sign are distinguished by their loyalty, obstinacy and serenity. Organized and lovers of order, those born under Taurus are serious and always reasoned, as well as being known for their tenacity.

Suzanne's color is green, symbol of a great spirituality, which affects the moral sense by developing strength and activity and is associated with hope and the search for stability.

Lo Emerald it is Susanna's precious stone: it is a gem linked to nature, wisdom and hope.

Susanna's lucky number is 3, considered the perfect number, it is the symbol of a completeness of being.

Suzanne is the title of a song written and released by the Dutch group VOF the Art in 1983, who then released the same song in English titled Susanna under the name of The Art Company. The most famous el paesena version of this piece is certainly Susanna di  Adriano Celentano.

add a comment of Name for girl: Susanna. Origins, meaning and curiosities