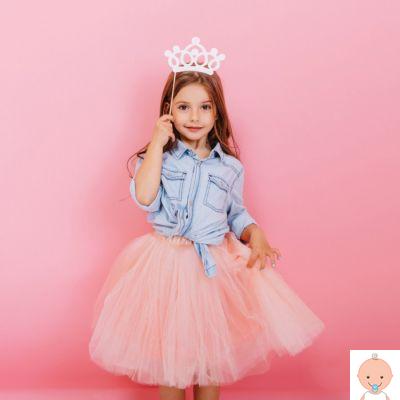 Are you expecting a baby girl and are you struggling with the delicate choice of the right name for her? If you already consider her the princess of her house then you could give her a truly royal name, drawing inspiration from cartoon princess names most loved and followed, not only Disney, therefore! Here is a list of cartoon princess names with their meanings and curiosities, a selection of decidedly original female names.

Anna is the name of the queen of Arendelle, Elsa's sister, and protagonist of the famous Disney Frozen saga. She is also a very traditional and very popular female name in the country: in 2022 it was imposed on 2674 baby girls.

The name day is the 26 July when the Catholic Church remembers Sant'Anna, the mother of the Madonna and Joachim's wife.

It is a name that is not very common in the country but quite popular in Anglo-Saxon countries. It is the name of the famous little red-haired Disney mermaid who defies all laws and rules to make her beloved prince fall in love with her. Its diffusion is growing in our country: according to ISTAT data on the most common names in 2022, 192 girls were called Ariel.

The names of the Disney Princesses

In the country Bella it has an absolute value of only 19, however a slight increase compared to a decade ago. Bella is the name of the protagonist of Beauty and the Beast who can see what is beautiful behind a monster appearance.

Read also: Dictionary of female names and villages and foreigners

The young Elena, after being crowned queen, must learn to rule the kingdom of Avalor: this is where the story of "Elena of Avalor", the recent Disney TV series, starts. Elena is a name of ancient classical tradition:

The name day is celebrated on August 18th when it is remembered Empress St. Helena, mother of Emperor Constantine I.

The name is ancient and very classic, but it is back in fashion thanks to the Disney Frozen saga which has been a huge success all over the world. The name is a German variant of Elizabeth and the name day can be celebrated on 26nd June, Saint Elisa's day.

Princess Fiona is the beloved of the ogre Shrek who frees her from a tower protected by a dragon only to discover that she too becomes an ogress at night. Her name is Adhespot and is the female variant of the Irish name Fionn. In the country in 2022 18 girls were called Fiona.

Perfect for those who love foreign names with an exotic flavor, Jasmine she is the princess loved by Alladin and daughter of the Sultan of Agrabah. She derives from the ancient Persian and in el paeseno can be translated with the name Gelsomina.

Melody is the name of Ariel's daughter, and is among the protagonists of the sequels to "The Little Mermaid". widespread in Anglo-Saxon countries, it is less popular in the country where, in 2022, it was imposed on 32 girls.

The story of the romantic love story and the adventures of the brave Princess Sissi, which takes place in XNUMXth century Europe, are at the heart of the animated series broadcast on RAI. The character is inspired by the figure of Elisabeth of Bavaria, future empress of Austria.

Elisabetta is a name of Hebrew origin and in 2022 369 babies were named.

The name day is the September 23th, when the most famous of the saints bearing this name is remembered: Saint Elizabeth, mother of John the Baptist.

Sofia is the name of the little princess protagonist of the cartoon series "Sofia the Princess". The name is really popular in our country and for years it has occupied the first place in the ranking of the most popular names in the country: in 2022 the absolute value was 5851.

Sofia celebrates the name day on September 30, in homage to Saint Sophia, martyr to the city under Trajan, together with her three daughters.

Tiana is the protagonist of the Disney animated film "The Princess and the Frog", based on the story of the Brothers Grimm. Tiana is a young African American who kissing a prince hit by a curse turns, like him, into a frog.

Tiana is an invented name and you can celebrate the name day on January 12, when Santa Taziana di la città - Martire is celebrated.

The names of Disney princesses: history and meaning ❯

add a comment of Names of cartoon princesses with meanings