Names of the most popular royals: the 10 most beautiful to draw inspiration from 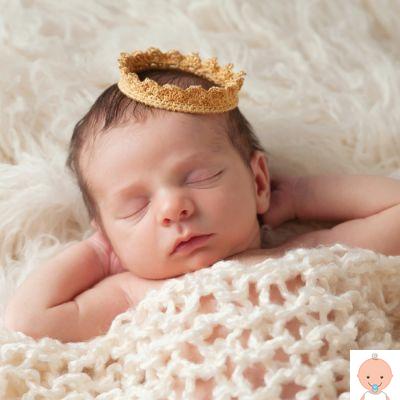 Names of the most popular royals

A new royal baby is coming: Meghan Markle and the prince Harry I am waiting for theirs second child and the couple, always very present in the international media and tabloids around the world, will communicate the name chosen for the child only at the last minute. Bookmakers are already working to predict what the name of the boy or girl will be: there are those who believe that a traditional name will be preferred (and if it is a girl, many are hoping for a tribute to Harry's beloved mother, the princess Diana), while others are convinced that, in line with their unconventional lifestyle choices, the couple will choose a more modern and trendy name. In any case, the happy event offers us the opportunity to take a journey into the world of names of the most popular royals: from London to Stockholm, that's it 10 royal baby names, with origin and meaning, from which to draw inspiration and inspiration if we have to choose the name for our baby.

George is is the eldest son of British Prince William and his wife, Duchess Catherine. He was born in 2022 and is third in the line of succession to the throne. The name George derives from the Greek Γεώργιος (Georgios), which in turn originates from two elements: γῆ (ge) which means "earth" and ἔργον (ergon) which means "work".

According to ISTAT data, in 2022 in the country the name Giorgio was given to 1085 newborns and was placed in 43rd place in the ranking of the most common male names.

In the village Charlotte becomes Carlotta, an increasingly popular name especially in recent years. According to ISTAT data, in 2022 the absolute value of the name Carlotta was 1.057 and ranks 39th in the ranking of female names in the country.

The name Louis is of German origin and then French and means "famous warrior". It derives from the names Chlodowich, Hlodwig or Hlodowig, which first developed into the form Clodovicus, which later became Ludovicus and then Looïs and Luis in old French. Louis is the name of the third son of Prince William and Duchess Kate Middleton.

ISTAT reveals that Luigi had, in 2022, an absolute value of 1076 and occupies the 44th place in the ranking of the most popular male names in the country.

Archie is the name chosen by Prince Harry and his wife Meghan for their firstborn. It is a classic name, one of the most popular in the United Kingdom, diminutive of Archibald: it is of Germanic origin that derives from the fusion of two elements: ercan (loyal) and bald (courageous). So Archie means "frank and strong".

In the Arcibaldo town it is really rare: in 2022 no child was called that!

The name Victoria it has a long tradition in royal families: it is even the most common female name among royalty. It comes from the Latin Victoria, which means victory. Vittoria is very popular in the country: according to ISTAT data in 1999 there were 680 girls called Vittoria, while in 2022 there were 2713. Thanks to this explosion in popularity, Vittoria ranks tenth in the ranking of female names.

Read also: Foreign names: which ones not to choose for a child

In royal families the name Elizabeth, brought by the current queen of England, it was the name of 5 representatives of the royal families. It is a name of Aramaic origin rendered in Hebrew with the name Elišéva. The name is composed of El ("Lord") and a second element related to sheva (feminine of shivah, "seven") and to nishba ("he swore").

Il meaning of Elizabeth, therefore, it is "the Lord is an oath".

In the country Elizabeth it had, in 2022, an absolute value of 369, certainly down in popularity compared to 1999 when it was chosen by 889 new parents.

James is the name of the second child of Prince Albert II and Princess Charlène, Crown Prince of the Principality of Monaco, born in 2022. He has a twin sister, Princess Gabriella, born two minutes before him.

James comes from the biblical Greek word Ιακωβος (Iakobos), used in the New Testament to translate the Hebrew name Ya'aqov. In late Latin the name was then adapted with the name Iacobus or Iacōmus. According to some sources, James would be a theophoric name and has the meaning of "God protected".

In el country Giacomo is still very popular: according to ISTAT in 2022 Giacomo's absolute value was 1295 and ranks 36th in the ranking of the most popular names.

Gabriella is the twin sister of James, daughter of Prince Albert II of Monaco and Princess Charlène, born in 2022. Gabriella is the feminine form of the name Gabriel, which derives from the Hebrew גַבְרִיאֵל (Gavri'el) and means "strong man of God ".

In the village Gabriella is less and less widespread: in 2022 it was imposed on only 82 newborn girls.

Leonor of Bourbon-Spain, princess of Asturias was born in 2005 and is the first daughter of Philip VI of Spain and his wife, Queen Letizia. According to the Spanish Constitution Leonor is the heir to the Spanish throne and has the title of Princess of Asturias.
Leonor is a diminutive of Eleonora, Spanish name and also el paeseno, which has dubious origins: according to some sources, the baptismal name of Eleonora of Aquitaine was Aenor or Anor which was also carried by her mother, Aénor of Châtellerault and therefore the people , to distinguish her from her mother, he began to call her allia Aenor, the other Aenor. According to other sources, Alienor would be a variant of the name Aenor or a Provençal form of the name Elena.

Eleonora is very popular in the village, although slightly down in recent years: in 1999, 2341 girls were called Eleonora, while in 2022 there were 969.

L'infanta of Spain Sofia of Bourbon-Spain, was born in 2007 and is the second daughter of Philip VI of Spain and his wife, the queen Joy. She is second in the line of succession to the Spanish throne after her older sister Leonor.

Sofia derives from the ancient Greek Sophia, which means "wisdom, wisdom". Sofia has been the most popular female name in the country for many years and is first in the rankings with an absolute value of 5851.

Female names 2022: the most beautiful and particular ❯

add a comment of Names of the most popular royals: the 10 most beautiful to draw inspiration from