Natural childbirth after a cesarean. What are the risks? 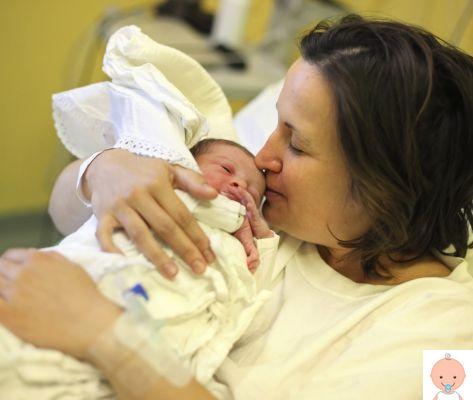 Natural childbirth after a caesarean, risks

As a midwife I am often asked the question: what do you think about being able to go into labor after the first cesarean and in case you would like to assist him at home? I will try to answer and give indications on when it is possible to face it and when it is not.


Putting myself in the shoes of a woman who didn't voluntarily choose the Caesarean section but he “suffered” it for more or less valid medical reasons, it is frankly normal that he may wish to have a spontaneous birth. Living the labor, the expulsive efforts, but also just knowing that my son is being born calmly, respecting the times, in a condition of absolute serenity and with his arms ready to welcome him. This is what the women I assist ask of me.

Birth at home: photos that are worth a thousand words

Exciting images that tell the story of home birth

To clarify the terms, the name VBAC derives from the English definition and literally means: Vaginal Birth After Cesarean (spontaneous delivery after cesarean). It is a practice that was born in the United States in the 70s from a request from a woman who absolutely wanted to experience the thrill of childbirth after having performed a caesarean for the birth of the previous child.

Read also: VBAC: natural childbirth after having a cesarean

The "technique" is to allow a woman at term of pregnancy to go through labor and a spontaneous birth after a cesarean was performed in the birth or in previous deliveries. In this case, labor is called "trial labor" that is, while the woman is in trouble, there will still be an operating room with a team available to intervene if the desired outcome is not achieved.

The success rate of this method is 76% or 7 out of 10 women with their second or subsequent children manage to give birth spontaneously. Today it is having a rapid spread all over the world, but if we talk about the country, we are a bit reticent or rather cautious with respect to other countries.

But when is it possible to have a trial labor and when not?

Spontaneous delivery after a cesarean is indicated in women under the age of 40 or that have already had previous vaginal deliveries and especially in women in whom the clinical reason for which the caesarean section was performed does not reappear.

While is contraindicated, or in any case the favorable outcome is reduced, if the previous caesarean sections are more than one but also if the baby has an expected birth weight of more than 4 kilograms. Why are there indications and contraindications?

What then are the actual risks of VBAC?

If we go to analyze the literature the real risks are very few and far between, can be summarized in two: the rupture of the uterus a scar level cesarean section e severe fetal suffering. As I said they are very rare but if it happens it becomes a real emergency for the life of the child but also of the mother.

What I recommend, before thinking about whether or not to face trial labor, is evaluate everything that the caesarean section brought with it. Specifically, the reason why it was done, for example if it was done by choice, for fear of pain; or for medical indications due to a mother or child's pathology; or even after a labor that did not go on as hoped.

Read also: Post caesarean: everything you need to know

It is also very important help the woman and the family to process the birth by caesarean, especially if not chosen. I am referring to the psychological implications that this surgery brings with it. Many women feel guilty as mothers for not being able to deliver their child, for not knowing what to do and how to do it.

Others may feel missing a piece of real life, a story of unexpressed emotions, the lack of first contact with the child in a quiet environment instead of an operating room. We need to work a lot on this because even fromProcessing the caesarean event may depend on the success of the VBAC.

If they were to ask me: what would you do as a midwife? I think it is everyone's right to be able to have the birth you want most, so yes i am in favor of VBAC. I am in favor as long as, of course all indications or contraindications are respected; But above all as long as the mother is adequately informed about all the possibilities, both positive and negative, that this practice entails so that she herself can choose, not under the imposition of a colleague or others, but in a conscious way.

When I am asked the question about it I must say that I am opposed to home care for trial labor and VBAC birth. Beyond the precise indications and regulations that are given to someone like me who is a local midwife who assists at home, I am against it because it is not physiology, and if it is not physiology it means that I do not have the adequate tools to monitor the health of mother and child.

I do not feel conscious of assisting travails of this kind at home because if something happens it is better to be in a place like the hospital because it is highly specialized in assisting this type of event.

As you can see mothers, the uncertainties do not only concern you, they concern everyone, including operators. Childbirth must be a beautiful experience and without risk for anyone neither for you nor for your baby. I just want to tell you to inform yourself, to make a personal opinion about natural childbirth after a cesarean and discuss it with your obstetrician or gynecologist, who will be able to direct you to the correct facility. Remember that basically the most important thing of all is to give birth to a baby and to love him more than anything else, regardless of how the birth takes place.

Natural or caesarean delivery? Which is safer for the baby? ❯

add a comment of Natural childbirth after a cesarean. What are the risks?