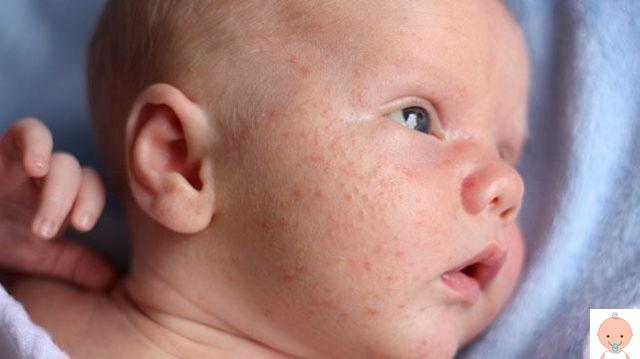 Will happened to you too, or it will probably happen to you brief, of square e controllare each millimeter of the little one little body of your bimbo. Just for to enjoy of thatodor typical of the children, For know him better or for controllare - taken from the healthy one anxiety yes neo Parents - if there is something wrong. AND perhaps you will have also happened to run into it, in the first settimane di "vita" of that little magical being bubbles, real pimples, that sprout overnight without knowing because. It is called acne infantile o acne neonatal. a phenomenon very common in Infants and that goes addressed with some trick but without particular stress.

When dealing with neonatal acne you should know that it is a reaction completely physiological to the disposal of hormones female, the estrogen, That the neonate is unable to eliminate entirely, because in the former months produces very few hormones and its liver he has one functionality limited on this front. Then nothing to do with intolerances food o reactions to what he has eat la mum, in case of nursing al breast. Far from it. But we explain better what happens in case of neonatal acne.


During the pregnancy la mum produces a big amount of hormones estrogen, which come metabolized from liver maternal. After delivery, these same estrogen, still present in thebody of neonate si accumulate and sebaceous glands are forced to a work extra with the production di accumulate di grasso, that inflame i bulbs hair and cause babies pimples, especially on the face. It is precisely neonatal acne.

A reaction that you can protract in case of nursing al breast, because in this case the estrogen continue to arrivare in 'body of neonate, even after some time from delivery. But that doesn't mean absolutely having to to interrupt thenursing, Because the reaction of child is absolutely natural, as well as the resolution of the problem neonatal acne. Same thing regarding thesupply area of mum, which it does not have nothing to do with these push pins.

THEacne it does not give any nuisance al neonate (not even pruritus) except if aggravated from others factors, Such as'irritation caused by saliva e regurgitation, clothes washed with detergents aggressive (which can irritate the skin already reddened), chafing. In this case it is useful rinse e to dry softly the face many times. So this is enough shrewdness toilet and theuse di detergents neutral, for safeguard la skin of neonate. It is also good forair open, but without theexposure direct to Sun.

The use of creme is not advisable, not even those based on zinc (to be clear those for the cultural, of diaper). They tend to occludere even more i pori, worsening the situation. Typically, the acne infantile they disappear by themselves downtown i five months and skin back to hers condition normal, velvety e smooth. If that doesn't to happen, you must contact the pediatrician.

Audio Video Neonatal acne, causes and remedies for baby "pimples"
Water for babies, when to start and which one to choose ❯

add a comment of Neonatal acne, causes and remedies for baby "pimples"