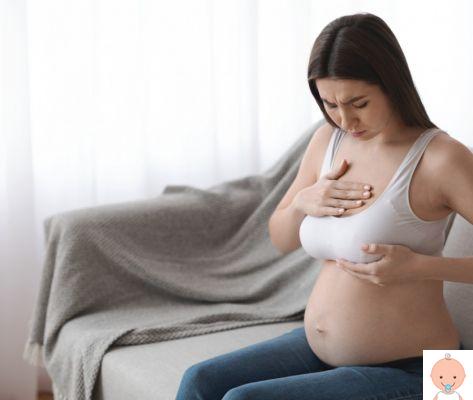 Pain in the pregnancy nipples

Symptoms of pregnancy are varied and can affect different parts of the body, from the breast to the abdomen. In the first few weeks of pregnancy, breast pain and tension are certainly common and can be gods pregnancy symptoms, but what can a nipple pain in pregnancy and when is it normal and when, instead, should it be referred to the gynecologist?

How breasts change during pregnancy

During the first few weeks of pregnancy, the breast pain tends to be deaf and insistent. The breasts are more swollen and heavier, and even the simple touch of the fingers can cause discomfort and discomfort. It is important to wear a bra comfortable, which does not tighten too much but at the same time supports the breasts during pregnancy and, if necessary, should also be worn at night (because the breasts can cause pain and discomfort during due to the positions taken during sleep).

This extreme nipple sensitivity it typically subsides within a few weeks: by the end of the first trimester, the discomfort and pain pass, leaving room for fullness and heaviness.

Il pain it is not the only breast symptom we can expect during pregnancy: in the first trimester, they may become more noticeable than bluish veins while during the second quarter, the area of areola it may become darker in color.

In the second and third trimesters, however, it is normal for the nipples to produce small drops of colostrum, a yellowish fluid called immunostimulating and highly nourishing "liquid gold" which represents the first nourishment for the newborn in its first days of life, waiting for the milk to rise. If the fluid leaks from the nipples are a little more abundant and make you uncomfortable, you can use some breast pads, which are snugly inserted into the bra.

The cups can also be useful if the discomfort is excessive and if the nipples become ultra-sensitive, even to the bra fabric.

Il breast pain it is often the first symptom of pregnancy and occurs afterwards one or two weeks after conception: This feeling of discomfort and pain in the breast peaks in the first trimester because the body is flooded with hormones, especially estrogen and progesterone.

It is hormones important because they prepare the body to grow a small human being and also to feed him. With this in mind, hormones act quickly to prepare the breasts for breastfeeding. The blood flow to the area increases and the breasts become larger, the milk ducts grow, and the hormones stimulate the growth of the milk-producing glands. These changes, however, can cause pain and discomfort, as well as skin irritation, burning and itching.

Is breast pain in pregnancy different from premenstrual pain?

Many symptoms of early pregnancy are very similar to those of PMS: in the days leading up to menstruation, the breasts can be more painful, tense and bulky.

However, these are changes that last a few days and disappear as soon as menstruation arrives. Also unlike pregnant women, nipples do not tend to darken and no longer become visible i tubercoli di Montgomery: the latter are small glands found on the areolas that increase in size and are more evident towards the sixteenth week of pregnancy.

I tubercoli di Montgomery they are small glands found on the areolas which, during pregnancy and especially in the second trimester, increase in size and become more visible.

Sharp breast pain, such as a knife stuck in a specific spot, is uncommon during pregnancy and should be reported to your doctor.

Breast pain in pregnancy: how it is and when to worry ❯

add a comment of Nipple pain in pregnancy: causes and remedies