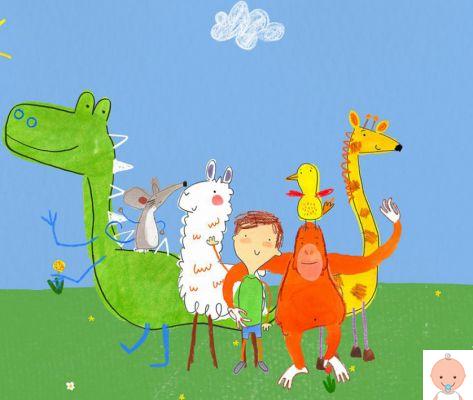 With drawing and colors you can really do everything, even explain autism to children. Here, in fact, is that Pablo lands on Rai Yoyo, the new cartoon where for the first time the protagonist is an autistic child able to face the small and big daily challenges thanks to his imaginative drawings.

The series, which just received a BAFTA nomination. was created by Grainne McGuinness, directed by David McGrath and originally transmitted in UK.

Read also: A cartoon to tell the world seen by autistic children

Pablo: what it's about

The animated series has as its protagonist Pablo, a 5 year old child suffering from autism and equipped with a large talent for drawing. He is an intelligent child and in the company of his special friends he manages to transform every problem into an adventure to live together.

I imaginative designs of little Pablo come to life when he manages to see each of his daily challenges as a fantastic adventure that will make him capable of facing the real world. Pablo is very intelligent and with courage, thanks to the help of characters he himself invented, he faces everyday challenges.

A typical episode begins in the real world, where Pablo is engaged in various kinds of activities. When he encounters a problem or something he doesn't understand (such as losing his smell after a bath or the unusual way sandwiches are cut to be rectangular rather than triangular), the episode will turn into an animated 'world of art', represented by the drawings of Pablo. There, Pablo and The Book Animals will work together to solve whatever problem is at hand. In each episode of the animated series, the main hero is faced with a problem of everyday life or something that he does not understand.

Through his imagination and his love for drawing, the problem in question or the thing he cannot understand will take shape and life on the sheet of paper, thus animating the fantastic world conceived by Pablo. A colorful and positive universe in which the child draws animals that represent aspects of the character of Pablo and many other people characterized by autism. The animals that Pablo gives birth to in his imagination become a real team, a team of friends ready to run to his aid whenever he needs them.

Pablo is always helped by his imaginary friends, who help him in time of need.


Topo: He is very reliable, cute and organized, but he also hates loud sounds. He speaks in the third person.
Dino: is a sensitive dinosaur, but often does not know how to express his feelings.
Pliers: Tang is an orangutan who is the big and funny of the bunch. He is always ready for anything, but he has trouble reading social signals and is not always very attentive.
Frullo: is kind and loves to sing. Her words in her comforting voice always soothe others when they are stressed.
Call: Llama loves to jump back and forth on its four legs.
Raffa: a male giraffe who is the smartest of the bunch. For this reason he is very intelligent and precise.
Pablo's mom: caring and attentive, she supports her son in every possible way. She appears mainly in the live action segments.

When it's on the air

The 52 episodes of Pablo are available on Raiplay. The cartoon is on the air every afternoon at 18.00 su Rai Yoyo (channel 43) but also, in reply, in the morning at 9.35.

add a comment of On Rai Yoyo comes Pablo, the first cartoon that explains autism