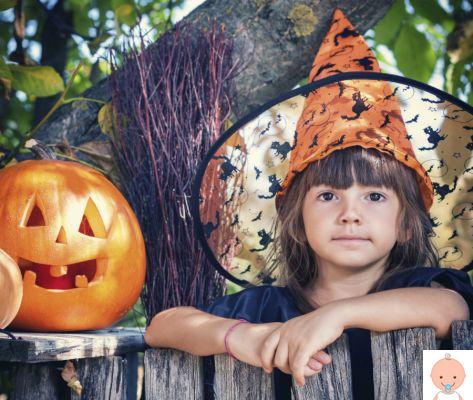 Origins and meaning of Halloween

Nowadays even in the country the feast of the dead is called Halloween and parties are organized for adults and children, but America with "trick or treatHasn't invented anything new. But what is the meaning of Halloween? It is a festival with much more ancient and pagan roots.

The origins of Halloween

The legend of Jack O'Lantern

It tells the story that, many and many years ago, an old blacksmith named Jack, a drunkard and stingy, lived in Ireland and that, on Halloween night, he had met the Devil by chance in a pub, who came to claim his soul. . The old man was about to fall into the hands of Satan, when, with a ruse, he managed to trick him into believing that he would give him his soul in exchange, however, for one last drink. The Devil thus turned into a sixpence to pay the landlord and Jack was quick enough to be able to pocket it. Since, then, he also possessed a silver cross, the Devil was no longer able to return to his original form. Jack then entered into a new pact with the Devil: he would let him go as long as he, for at least 10 years, did not return to claim his soul from him. Satan accepted. Ten years later, Jack and the Devil met again and Jack, always with a ruse, managed to escape the power of the Prince of Darkness and make him promise that he would never seek him again.


The Devil, who was in a difficult situation, could not help but accept. When Jack died, due to his dissolute life, he was not admitted to the Kingdom of Heaven and was forced to knock on the Gates of Hell; the Devil, however, who had promised that he would not seek him, sent him back by throwing at him a burning infernal ember. Jack used it to find the right path and, so that he wouldn't go out with the wind, he put it under the turnip he was eating. When the Irish headed to America, they brought this legend with them, and since turnips are not as widespread in America as they are in Ireland, they replaced them with the more common gourds.

Not too scary Halloween chores

Some ideas for making easy and not scary jobs for Halloween

The traditions of Halloween

We read about Dienneti that it is tradition in Europe and especially in the country to prepare special sweets in the days close to November 2, which often recall this anniversary in the name or in the shape and consistency that of a bone. Another recurring reference is to fingers, while the horse-shaped cake is probably linked to the legend of Proserpina. Therefore, there are many Halloween recipes for children.

almond pastries, ovoid and flattened, sprinkled with icing sugar; they have the appearance of an amaretto, but have a greater consistency (Emilia-la cittàgna, Lazio, Lombardy, Marche).

hard biscuits, with almonds and egg white (Piedmont and Lombardy)

oblong-shaped biscuits (Veneto), sometimes covered with chocolate (Sicily). In Sicily, according to the original version, the "Dead bones" are very dry and white and brown in color. With sugar, flour, egg white and clove water, they are also called "Paste di Garofano" or "Mustazzola" due to their hardness.

hand-shaped dessert, made with egg pasta and filled with ricotta and cream mousse, typical of Sicilian pastry.

present in the Sicilian tradition, these are colored sugar statuettes, reproducing paladins or generic male and female figures (the dead, the ancestors of the family).

also present in the Sienese area, with origin in Montepulciano. With a crumbly consistency and round shape, they are mixed with chopped almonds.

large bread, in the shape of a horse (Trentino Alto Adige).

circular bread with two hands that join together (Sicily).

small sweet rolls, made with crumbled biscuits, filled with candied fruit and packaged on wafers (Lombardy).

Hormones: their role in pregnancy ❯

add a comment of Origins and meaning of Halloween: thrilling parties