Ovulation in pregnancy, is it possible? 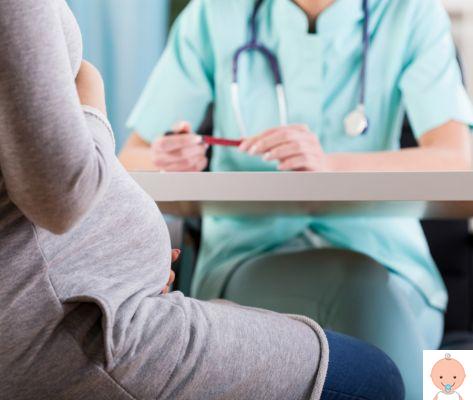 Is it possible to have theovulation in pregnancy? Actually no. When fertilization occurs, the presence of beta Hcg sends a signal to the ovaries to communicate that conception has taken place and to change the production of the various hormones, which no longer serve to promote conception but to favor the continuation of pregnancy. This increases the amount of progesterone which actually helps to block ovulation.


When the egg comes fertilized from the spermatozoon ovulation is interrupted and the ovaries no longer release any eggs. In short, if you become pregnant, ovulation stops.

In very rare cases it is possible to ovulate a second time (double ovulation).


What happens in this case?

The first egg is fertilized and conception has already taken place, and after a very short time the ovary releases another egg which could also be fertilized, thus giving rise to a twin pregnancy.

During pregnancy, some symptoms may occur that appear to be quite similar to those of ovulation. In particular:


Often during the first weeks of pregnancy an excessive presence of losses white and filamentous that may suggest ovulation is taking place. In fact these losses (leucorrhea) are completely normal and are caused by increased estrogen production.

And the brown leaks similar to those of the menstrual cycle?

In the beginning these losses can be caused precisely by theplant of the embryo in the uterus (implantation losses) and are not manifestations of a menstrual cycle. Of course, if the losses were to be of greater entity, it is good to consult a doctor.

Pain from ovulation in pregnancy

When ovulating many women can try pain and have small cramps at the height ofovary who is ovulating. These pains can also occur during pregnancy and can be quite similar to those that occur in the days of ovulation. What is it about? In the first few weeks of pregnancy it is possible to have these small abdominal cramps which are nothing other than related to the implantation of the embryo and then to all the changes that are taking place at the uterine level. As the pregnancy progresses the pains can be caused by the position of the baby, the uterus which increases in volume, the small contractions preparatory. Of course, if the pain is particularly severe, it is always a good idea to call your trusted gynecologist to make sure that everything is going well.

Is it possible to have sexual intercourse during pregnancy?

If the fear is that of getting pregnant, then of course you can have sex with your partner. Since there is no ovulation it is absolutely impossible to get pregnant while you are already expecting a baby! The sex it is not at all contraindicated during the nine months, on the contrary, it can be a source of pleasure and well-being for both the future mother and the couple. THE sexual intercourse they are not recommended only in case of a high-risk pregnancy or in particular circumstances, so it is always advisable to ask your doctor and trust his advice.

add a comment of Ovulation in pregnancy, is it possible?