Pecorino cheese during pregnancy: can it be eaten? And what are the risks? 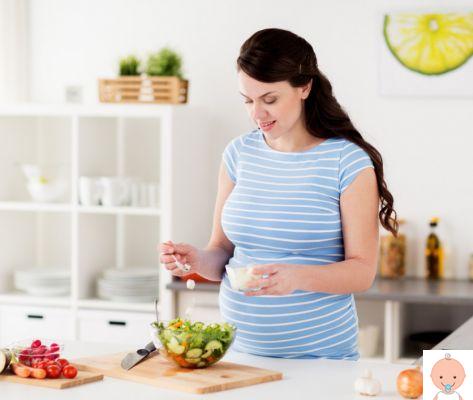 Il cheese it is certainly a food rich in nutrients useful for the future mother, but when you are pregnant you must pay particular attention to nutrition, selecting the foods allowed and those to avoid. The pecorino in pregnancy it's possible to eat? And which one to choose?

Il XNUMX cups milk and derivatives, such as yogurt or cheeses, are very important foods in the nine months of pregnancy because they provide the mother's and baby's bodies with precious nutrients, such as magnesium, phosphorus and obviously calcium, but also proteins and vitamin B12.

But we must not forget that some cheeses are to be avoided and that this food is still often rich in fat so it should be consumed in moderation. It is frequent that the gynecologist, in drawing up the pregnancy diet, advises to eat a piece of Parmigiano Reggiano every day, and it is in fact a good habit to ensure the right amount of calcium and important nutrients every day.

But what are the cheeses that we can eat safely?

Vanno avoided, on the other hand, cheeses with molds, for example Gorgonzola, soft blue cheeses such as Danish blue and Roquefort, those that have a white outer skin and are soft inside and in general all products made with raw milk .

The consumption of unseasoned cheeses or cheeses prepared with raw milk can promote listeriosis, a bacterial infection caused by a pathogen present right in the unpasteurized dairy products which is potentially responsible for miscarriage, neonatal mortality and complications, meningitis, premature birth, septicemia and problems in the newborn.

In many cases, listeriosis does not cause any symptoms in the mother, but the bacterium can cross the placenta barrier and reach the fetus for which it is very dangerous.

Furthermore, it should not be underestimated that during pregnancy it is easier to suffer from gastritis, constipation or diarrhea and gastrointestinal disorders: for this reason it is not a good idea to overdo the consumption of cheese.

Can i eat pecorino cheese when pregnant?

As we have said mature cheeses are granted, including pecorino, because of the process of matured for at least 12 months it breaks down the presence of bacteria and prevents them from proliferating. Furthermore, pecorino generally contains low amounts of fat and the right amount of sodium.

Pecorino not matured during pregnancy

The fresh pecorino is prepared using sheep's milk which is filtered and worked raw in the dairy, therefore it is preferable to postpone consumption until after childbirth and enjoy a slice of excellent aged pecorino.

The so-called pecorino primosale it is obtained from the tuma sprinkled with salt after about a month of rest. Therefore, it is not a mature cheese: it is fresh and as such it cannot be excluded that it contains potentially dangerous bacteria for the fetus and pregnancy.

Pediatrician: how and when to choose the children's doctor ❯

add a comment of Pecorino cheese during pregnancy: can it be eaten? And what are the risks?