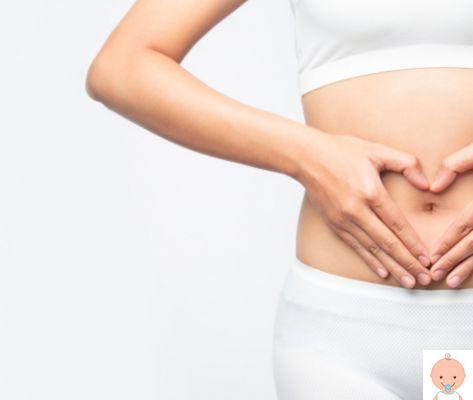 Between menstruation, women may notice some blood loss. It is spotting, uterine blood emissions less consistent than those typical of menstrual flow and of a different color, not accompanied by typical symptoms of the cycle such as abdominal cramps, fatigue, breast tension and mood swings. Vaginal bleeding that occurs between menstrual periods is known in medical terms as "intermenstrual bleeding". The period of women it can range from 21 to 35 days but on average there are 28. The menstrual flow usually lasts from 2 to 7 days.

Also read: Pink leaks: causes and when to worry

Pink discharge and ovulation: what they are

One cause of abnormal vaginal blood flow is ovulation. During the period of ovulation there is an increase in the production of estrogen. They are the hormones associated with the release of the egg from the ovary. This sudden rise in estrogen can contribute to intermenstrual vaginal bleeding. Particularly if this occurs between the 13th and 16th day of the menstrual cycle. In general, in these cases the color of the blood varies between pink and brown. Sometimes it can be accompanied by white colored cervical mucus and some cramps in the lower abdomen.

There may therefore be a link between pink discharge and ovulation, because the bursting of the follicle following the complete maturation of the egg can lead to a small loss of blood, which should not be of particular concern.

Leaks pink before your period

A few days before your period you may notice pink-colored vaginal discharge, premenstrual spotting on the underpants. The cause is the small hormonal shift that your body lives before the arrival of Menses. This type of loss need not worry, as they are a normal and physiological consequence. When the egg is mature, the follicle bursts and can cause blood loss that mixes with other vaginal mucus: hence the pink color. Light pink leaks can also indicate that one is starting pregnancy.

The beginning of a pregnancy it is generally accompanied by the so-called plant losses, that is a very light bleeding caused by the rupture of the blood vessels of the endometrium following the implantation of the fertilized egg in the uterus. These leaks rose they occur about ten days after conception, and differ from the regular menstrual cycle because of the color and intensity that is not comparable to the usual flow.

Leaks pink after your period

It is rare, but possible, to notice leaks even on days immediately following menstruation, up to 5 days later.
These are very small and isolated blood losses. These losses are generally not pink in color but tend to brownish.

When pink leaks happen after intercourse we speak of post-coital hemorrhage. Check if this is an isolated phenomenon or if it happens frequently after intercourse. In the case of the isolated phenomenon, the pink discharge can be the signal of a small trauma of the genital organ caused by a too intense penetration or from one insufficient lubrication. However, if you frequently notice blood loss after sexual intercourse, you should contact your gynecologist.

When the pill is the cause

A fairly common side effect of birth control pill is the appearance of spotting persistent. It happens because the body needs time to get used to the presence of these hormones, whose function is to control the menstrual cycle. Leaking is more common if you take the pill at a different time than usual or if you forget it altogether. After the first three months, however, it shouldn't happen again. If not, see your gynecologist to see if you should switch to a different pill.