Playpen for children: pros and cons and guide to choosing 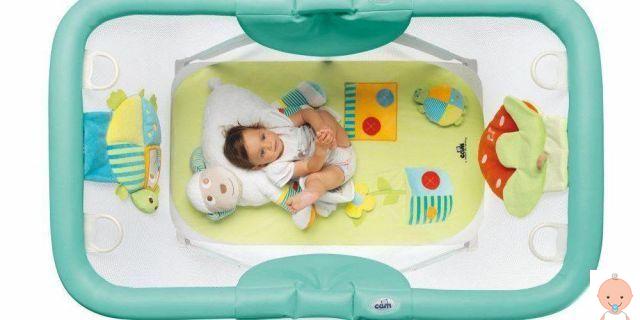 Up to a few year ago, there was one in almost all CASE​ with children: let's talk about the box. For many moms is a manna from sky to succeed in do something in casa and have the hands free. For other instead it is just a trouble useless, as well as a "cage"Where to" lock up "one's own son. Where is there truth between these two positions? As almost always happens, the virtù lies in mezzo: box it is not a from object demonize, but at the same time it doesn't have to be used in a manner excessive and not even like "parcheggio"For their own children. Let's see a little in detail.

The first question and from when you can put a bimbo in box? The time ideal is about dai 6-8 months, that is, that period in which more or less all small they manage to stay seatedand move and start using the hands to take the objects, observe them well and play with it (even if often only for a few minute). When they start to to crawl and, even more, a walk, the space of box becomes limiting. THE'effect then it becomes contrary, With children that you innervosiscono.

The second one question then it is: because put our son in box? Let's not feel like mothers saturate for this choice: occasionally have 10 minutes di time in itself it is necessary e sano! The box that's fine if you have to do something potentially dangerous for the small (Eg iron), if you want protect it by the impetuousness of the little brothers or from dogs e cats un po' troppo playful, if you have to pass thevacuum cleaner or - a lot trivially - if you have to prepare il lunch.

Obviously the good one success of the "experiment" with the box it depends a lot on the character of our bimbo: those more rest assured and they love touch e observe the objects they will feel to them ease in this space, they will play with what you put inside, they will watch their first books. Those who love a lot move, which they already have tried out the premium “raids" let's hope crawling o crawling on floor they will feel "forced" in box and they probably might not accept it May

And here ours comes into play common sense di moms: never oblige a child a stay in box and especially - may put it in there angry, as if it were one punishment for something he's done. You will only increase his insecurity and favor a feeling di abandonment from your part. Nothing more mistaken with creature so small they have a lot need area of mum. Rather, place yours son in box talking to him softly, with cuddles and words desserts, giving him his games favorites. And not disappear completely from his view: stay in the nearby, even for one question di safety.

Il box should not be used too much a lungo: use must be moderate e limited a little bit of time al day, time that depends on how the child reacts to this news. However, there are at least a couple of aspects negative regarding the use of the box. First of all, this system prevents to the small of train a to crawl because it space è reduced, limit her "explorations"In casa, fundamental for his development psycho-motor. Furthermore, holding on ai BORDI or alle handles which are present in almost all models, might try to get up in piedi. If this is premature a 6 months, it can instead become Useful a little further, when you get close to the former passivated. And finally there is often a problem of space, especially if we have CASE​ small.

How choose then the box for our son? The first thing from evaluate and the stability of product, which must comply with precise standard di safetyI feet they must be antislip e anti-tipping. Attention to the matter with which i are made box, which absolutely must be non-toxicI box have the bordo padded and some models are subjected to a "test of bite”To avoid that, by placing the mouth o biting, the little ones can remove of the small pieces of coating, for an danger huge (HERE you will find an example).

For a safety more greater you can opt for a wooden box. The problem in this case it may be space because they are a little more great and not always resealable, unlike those classical that you can put easily.

Among the others features which must have a box:

Some models are equipped with various "optional". Some, for example, are made in such a way that the chain pacifier holder you don't stay entangled in network. Others have gods toys hanging above or the fondo that takes off to put it on land like gym. Still others have one hinge to open a passage to do to come in e go out alone the child, but clearly it is one thing suitable to most older children (take a look HERE anyway).

I prices of box I'm very variables depending on what you are choose. a advice to save? Buy a camping cot: with one expenditure you have two products to use according to what there is must.

If you decide to buy un box, add it to yours birth list (do it HERE if you don't have it yet).

add a comment of Playpen for children: pros and cons and guide to choosing