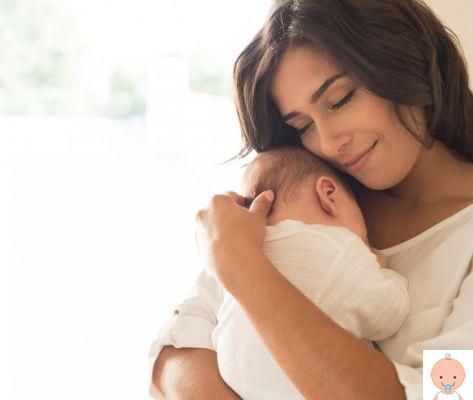 We are well aware that the percentage of caesarean sections is always very high in our country: in many cases the surgery is scheduled by the gynecologist for various reasons, and this allows future mothers to receive useful information on what will happen after the birth. But in other cases the caesarean is done urgently and women arrive at the post-partum phase without being prepared neither physically and psychologically for what awaits them. Sometimes not having given birth naturally creates a sense of inadequacy in the woman and, if she has had to resort to general anesthesia (usually an epidural is used), she has not even been able to see her child being born. But the important thing is that our little one is born and that he is healthy. So the first tip to better deal with the postpartum cesarean section is to dedicate oneself exclusively to him.

After the caesarean what to do

Immediately after the surgery, you return to your room with one drip and catheter. In the first few hours you will not feel pain because the anesthesia is still able to keep the lower limbs numb, from the belly down. The pain it will increase as the hours pass and the effect of the anesthesia will disappear. Typically a drug pump is inserted containing a mix of painkillers that will allow us to better manage the pain. As soon as possible we will have our baby in the room with us and we will be able to hold him in our arms and attach him to the breast.


It is said that those who give birth by caesarean cannot breastfeed. It's not absolutely true! The surgery does not affect either the baby's sucking capacity or milk production. If anything, you may have trouble finding a comfortable position to breastfeed because of the stitches, but once you have found it, that's it (for example lying on your side with the baby next to you).

However, the advice is to rest for the first 24 hours and then try to sit on the edge of the bed the next day and after 48 hours even get up to take a few steps and sit in an armchair.

La scar it will be covered with a plaster and medicated every day. It is a painless operation, which can also be done alone once you return home, until the stitches are removed (after 7 days). A few days after giving birth it will be possible to take a shower, just dry the scar well and apply an antiseptic. Furthermore, since the incision is made very low, in the future the affected area will be covered by pubic hair and will not give any aesthetic problems. During the days of hospitalization, the nurse will take care of the intimate hygiene, but there are also those who the next day are already up and doing it alone.

The points, as we said, will be removed after a week / ten days and that will be a bit of a turning point because you will feel better both psychologically and physically. The area affected by the cut will remain numb (as if anesthetized) for a long time, even for months.

Read also: Caesarean delivery on request, can it be done?

La full recovery it will happen within a week, when the stitches are also removed and the pains are gone. After 40 days, at the end of the so-called puerperium period, a new check-up will be made by the gynecologist.

The earliest times (at least for the first month) is advisable do not lift weights or subject yourself to excessive exertionThis is because the abdominal muscles were severely affected by pregnancy and then by childbirth and because the effort would overload the scar.

No problem regarding the resumption of sexual activity, even if it is advisable wait a bit for another pregnancy (usually the recommended time is 2 years). Generally, gynecologists recommend waiting at least a week before resuming sexual life, that is, when the stitches will be removed.

The use of the band for post caesarean delivery it is very useful, almost indispensable. The belly supports the abdominal muscles and the area where the scar is located and allows us to get out of bed or chair, to move and carry out, after a few days, also our daily activities, containing pain.

How does the belly change after pregnancy and childbirth and when will it return to the way it was before?

Naturally, the skin will have lost some elasticity after pregnancy and the belly may be a little flabby and sagging. First of all it is important not to have hurry and wait a few months to give the abdominal tissues and muscles time to recover. After it is advisable to start a little physical activity, such as swimming, or doing some gradual abdominal exercise.

It is also good to take care of the quality of the skin with creme anti-stretch marks and elasticizers and professional massages.

Uterus after cesarean when it returns to normal

The uterus itself is dilated exponentially during the nine months to welcome the baby and support its growth. After delivery it does not immediately return to its original size but it takes some time: for some a couple of months, for some others even more. The uterus reduces its size with small contractions that begin immediately after delivery and continue in the following weeks.

Post childbirth and swimwear test: all on the beach! ❯