Postpartum spiral, what it is and when to use it 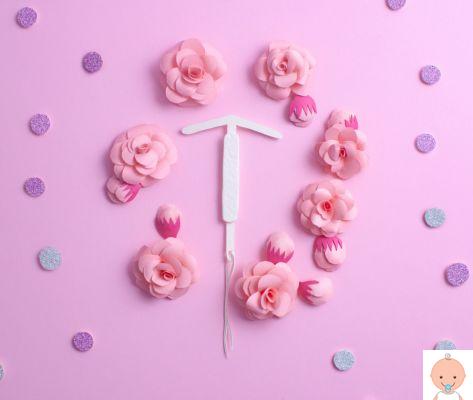 After giving birth, the resumption of sexual life is a sensitive issue. The woman experiences a natural decrease in desire, caused by fears, fatigue, little sleep after the birth of the baby. But, after some time, the desire returns and it is then that we have to think about a possible contraceptive to be taken if you do not want to get pregnant immediately (also because, for example, if you have undergone a caesarean section, it is not recommended to have another pregnancy immediately).

The post-partum contraceptive methods that can be taken are different, including the spiral.

It is a very effective intrauterine device for birth control, with a 99% accuracy. Let's find out everything about the post-partum spiral. How does it work? When can it be entered? What are the pros and cons of this contraceptive method.

What is the spiral

La spiral, also called in jargon JUD (acronym for Intra Uterine Device) is an intrauterine contraceptive that has evolved a lot in recent years, becoming one of the most popular choices among women, even very young.

The intrauterine coil, in fact, is a T-shaped device that is inserted inside the uterus to prevent pregnancy. Initially it was recommended as a contraceptive method only to those women who had already given birth, but, over the years, some smaller sizes have been made, also suitable for young boys, as a valid alternative to pills and condoms.

In post-pregnancy, the pill is a contraceptive method recommended by gynecologists, because it is effective, safe and not harmful for the baby (even if you are breastfeeding).

How the spiral works

there different types of contraceptive coil, but basically a division can be made between hormonal spiral and copper spiral. Both are placed in the uterus, both avoiding a possible pregnancy until they are removed.

La hormonal spiral It works by releasing a small amount of progestin into the uterus, the latter thickens the cervical mucus present at the outlet of the uterus into the vagina (cervix) and reduces the ability of sperm to enter. It also makes the lining of the uterus thinner, making it less suitable for implantation of the egg. There are women who, after the implantation of the hormonal spiral, stop ovulating, in most cases, however, this intrauterine device does not block the natural ovulation of the woman.

La copper spiralinstead, it releases small amounts, not of progestin as before, but of copper. Precisely this metal modifies the composition of the fluids in the uterus and fallopian tubes and thus prevents the survival of the spermatozoa and the implantation of the egg if it is fertilized.

If you intend to apply a contraceptive coil, in the post-partum period, it is good to ask your gynecologist for advice who, according to your needs, will be able to choose the best model.

How the spiral fits

La spiral it is a device that should only be applied and removed by a gynecologist. Before the insertion of the spiral (hormonal or copper) the patient is usually subjected to a series of analyzes, to verify her state of health.

Those analyzes are carried out capable of identifying any infections (vaginal swabs, pap tests, urine tests, for example), to avoid a possible pregnancy in progress, moreover, the woman must take the pregnancy test, finally the gynecologist carries out a ' internal ultrasound to understand which type of spiral to insert.

The insertion it lasts about 15-20 minutes, in some cases there is more discomfort and pain, but the smaller the spiral, the more they are reduced. The woman may feel small cramps or have episodes of spotting. Usually these are normal reactions, but in case of such manifestations it is always good to inform the doctor.

The removal of the IUD - whether copper or hormonal - can take place at any time, in case of discomfort or desire for a new pregnancy. Or, alternatively, depending on the spiral inserted, the removal takes place after 3, 5 or 10 years. The gynecologist must always take care of it.

There are several studies that reassure women aboutuse of the IUD in post-partum. The intrauterine device, in fact, does not have any kind of contraindication for those who have just given birth, it is a safe contraceptive, which can be inserted as early as one month after birth and which does not interfere with breastfeeding.

After giving birth, it is good to discuss the topic of post-partum contraception with the gynecologist without delay. If the woman does not have any particular health problems, surely the spiral will be among the specialist's suggestions.

Furthermore, the spiral is a contraceptive method that it absolutely does not interfere with breastfeeding it is therefore a safe system, which reassures the mother from all points of view after childbirth.

Spiral contraindications and side effects

L'application of the spiral has several advantages, already highlighted in the previous paragraphs, for example it is a contraceptive that once inserted can remain in the uterus for several years, ensuring maximum effectiveness. The spiral also reduces the risk of polyps in the endometrium, reduces menstrual flow, can be removed at any time.

Like any contraceptive method, however, the spiral also has its own disadvantages And its contraindications. Let's see in detail what they are.

Disadvantages of the spiral

Contraindications of the spiral

Among the contraindications, we say that generally the spiral is not recommended to who:

Sterilize pacifiers and bottles, when and how to do it ❯

add a comment of Postpartum spiral, what it is and when to use it