Postpartum stretch marks: how to prevent and treat them 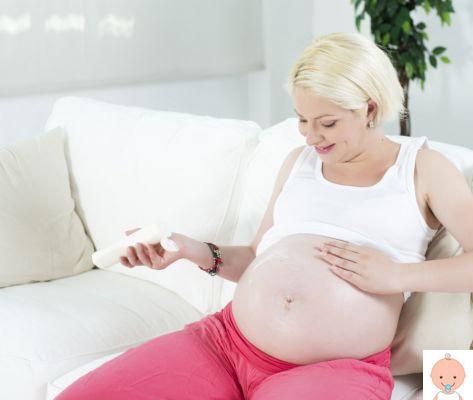 Le stretch marks they are one of the best known imperfections of pregnancy, as well as one of the most democratic. In fact, it is rare that they do not begin to develop as early as adolescence, while after having a child they almost always increase or appear in other areas of the body, especially in the abdominal area. There are those who see them as “scars” to be proudly displayed, a small price to pay after giving birth to a new life, and there are those who are annoyed and embarrassed by them.


But those who decide to prevent and / or treat them are often bewildered by the huge amount of treatments that are now advertised as "infallible", ranging from white cosmetics to photorejuvenation techniques, such as laser or pulsed light. The information is also conflicting: if there are those who swear to have had "miraculous" results with this or that treatment, many other people claim to have "tried them all" and have not seen appreciable improvements. Today we therefore want to clarify the various aspects of the issue "Postpartum stretch marks", between false myths to dispel, interesting statistical data and the various differences between treatments.

What are stretch marks?

Stretch marks are a type of scars pearly hue, generally caused by rapid extension of the dermis. They are therefore associated with weight changes and, indeed, with pregnancy. They can also be affected by hormonal changes such as those that occur during puberty or, in fact, gestation. During pregnancy, stretch marks normally appear in the abdominal area. A medical study from 2022, published in The British journal of dermatology, estimated that about 90% of women are affected, and of these, almost half already have them before the 24th week of gestation. Often, those who have stretch marks during the first pregnancy do not find them in the following ones.

Read also: Stretch marks in pregnancy, do not panic. The midwife's advice to avoid them

Can stretch marks appear after childbirth?

How to get rid of post pregnancy stretch marks

Unfortunately, there is no evidence that creams and cosmetics can work effectively against stretch marks. The only chance is intervene when they are still in the inflammatory phase, or red or pink in color. However, it must be said that specific creams and oils are not completely useless: optically improving the elasticity of the skin, and making it appear softer and smoother, in fact they disguise the imperfection a little, even if they don't cure it.

Stretch marks in the navel after pregnancy

Recently, the case of Kim Kardashian made a sensation when, after being seen walking out of a well-known Beverly Hills plastic surgery center, she revealed that she had shrunk her navel and eliminate post-partum stretch marks. Unfortunately, it is not possible to intervene in many other ways, even if… many new mothers choose to camouflage imperfections in this area with a tattoo!

How to remove red stretch marks?

In recent years there has been a lot of talk about cutting-edge treatments that should remove even the hated red stretch marks, without getting to plastic surgery. At the forefront are photorejuvenation techniques, such as laser or pulsed light. In addition, other techniques involve the use of the dermaroller (i.e. the abrasion of the skin with tiny needles to facilitate the penetration of a subsequent treatment) or glycolic acid. These are generally procedures that work by causing a kind of abrasion of the skin, thus stimulating it to produce elastin and collagen and reducing the appearance of stretch marks. In fact, the skin is regenerated, but there are many contraindications, including small scars or skin spots that can be caused precisely by the procedure. Moreover, treatments can minimize existing stretch marks, but they certainly do not protect from the formation of new ones.

Then there are the cosmetic treatments, definitely cheaper and less risky than dermabrasions. They are generally ineffective towards older stretch marks, and care should be taken as most are not recommended during pregnancy - this information is however clearly indicated on the package. It seems that the most effective are those based on vitamin E, and the best results that can be achieved are in terms of a smoother and smoother skin slight decrease in discoloration. In short, they do not work miracles, but they can help with regard to more superficial stretch marks.

How to prevent stretch marks in pregnancy

Preventing stretch marks in pregnancy is, to some extent, a false myth. In fact, remember that the onset of stretch marks is largely due to genetic predisposition. It will be enough for you to collect some testimonies on the forums of mothers, or even among your friends and acquaintances, to discover that there are those who have been very loyal in the treatments and yet found themselves with so many stretch marks, and those who have never put an oil yet it has almost none. What is certain is that anything that can increase the elasticity of the skin contributes to prevention, a bit like wrinkles. Already in the ancient city, pregnant women smeared olive oil on their stomachs to prevent stretch marks. And not only consistency is important, but also to act internally as well as externally. Keep yourself hydrated even from the inside, drinking a lot of water, green tea and eating a balanced diet with plenty of seasonal fruit and vegetables plays a fundamental role. And finally, let's remember that stretch marks are a very common and not so disfiguring blemish, indeed, depending on the light they can become almost imperceptible. In short, having an excessive worry is not really worth it ... considering that it was really a tiny price to pay :-)!

add a comment of Postpartum stretch marks: how to prevent and treat them