Pre-ejaculatory fluid: can you get pregnant? 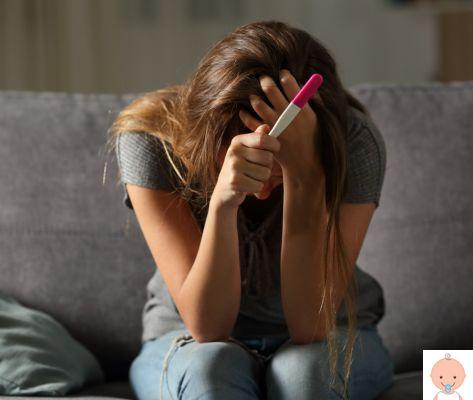 Pre-ejaculatory liquid: what it is

Il pre-ejaculatory fluid (or pre-seminal fluid) is a transparent, colorless or whitish secretion, characterized by a rather viscous consistency. It is produced by the male reproductive system and, during sexual arousal, emerges from the urethral lumen and precedes orgasm.

The pre-ejaculatory fluid, also called pre-semilal fluid, is a fluid very similar to sperm but which has some substantial differences.

The name itself suggests that it precedes ejaculation, this liquid serves in fact to create an environment suitable for the passage of seminal fluid, the real one. However, there are still many today doubts about the prespermatic liquid, especially in terms of possible pregnancy and sexually transmitted diseases. Let us therefore try to clarify the subject, answering all the doubts of women and men.

Read also: Conception: what it is, how it happens, the first symptoms and how it is calculated

Are there sperm in the pre-ejaculatory fluid?

The pre-ejaculatory fluid contains substances similar to sperm, for example acid phosphatase. Specifically, the pre-seminal fluid is composed of

With respect to the question "are there sperm in the pre-ejaculatory fluid?"The debate is heated and the theories are conflicting. Some experts argue that, albeit in minimal quantities, the pre-seminal fluid contains spermatozoa, there are those who speak of total absence. The possible presence of spermatozoa in the liquid preceding ejaculation, however, it is rated as variable and low.

Simplifying as much as possible, we can say that the difference between pre-ejaculation fluid and semen it is substantial. They are absolutely not the same. The pre-seminal fluid has the task of preparing the urethra for orgasm, lubricates it to facilitate the passage of spermatozoa at the time of orgasm.

The sperm, on the other hand, is the product of ejaculation, it comes out of the penis at the moment of the peak of sexual pleasure and, if the person is fertile, it contains spermatozoa.

Can you get pregnant with pre-ejaculatory fluid?

It is among the most frequently asked questions and the answer is "Yes". Although rare, the possibility of getting pregnant with pre-ejaculatory fluid cannot be ruled out. This can happen due to the presence, albeit in minimal traces, of spermatozoa in the pre-seminal fluid. For this reason, experts advise against interrupted coitus, as a contraceptive modality, if you do not want to become pregnant.

Although, as mentioned above, there is no certainty about the presence of spermatozoa in the pre-ejaculatory fluid, this possibility cannot be ruled out. In addition, there may be residual sperm in the urethra, still viable, from a previous intercourse.

Pre-seminal fluid can cause transmission of sexually transmitted diseases and infections (such as chlamydia and gonorrhea). For this reason, the use of condoms is always recommended in case of risky sexual contacts or occasional intercourse.

Arguing in front of the children ❯

add a comment of Pre-ejaculatory fluid: can you get pregnant?