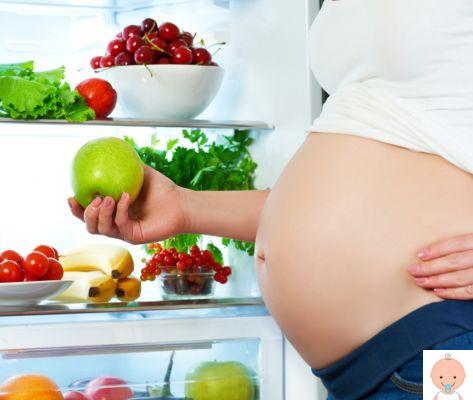 During pregnancy it is absolutely important to have a diet that allows the correct nourishment of the mother and the fetus. This does not mean, as was once believed, that the pregnant woman must eat "for two", or that she must over-eat, but rather the importance of a "quality" diet, which guarantees the correct daily intake of all the substances necessary for the development of the child. In this sense it is evident how the conditions of eating disorder are a risk factor for the development of the unborn child and for the health of the mother. The greatest danger is represented by anorexia nervosa and orthorexic conduits.

Orthorexia and anorexia in pregnancy

The term orthorexia etymologically means "correct and right diet" and indicates the voluntary choice to consume only foods of a certain type, for example only organic foods, or animals raised under certain conditions. Orthorexics are therefore those who are inclined for an extremely selective diet, as in the case of fruitarians, vegans or vegetarians, which can therefore lead to excluding from one's diet entire classes of foods that are precious sources of nutrients necessary for the body's ideal needs. An insufficient diet can first of all create problems with growth in the fetus, preterm birth, body weight and birth size below the norm, poor development of bones and teeth.


Furthermore, they are extremely dangerous conditions of prolonged food deprivation, such as those found in the presence ofnervous anorexia or which constitute the long-term effects of a previous anorexic pathology. Alterations in the state of health can be found here that can compromise the outcome of pregnancy.

Among them we can mention:

Even in the case of bulimia nervosa the effects on the fetus they are completely worrying. In fact, the typical binges of bulimia, although generally occurring in women who maintain a normal body weight compared to anorexics, are generally followed by periods of food restriction. Often these periods of fasting are functional to the binge itself. The child, on the other hand, needs a daily intake of the most important substances for its development and they cannot be provided to it only from time to time.

It is therefore clear that an eating disorder represents a serious risk factor for the health of pregnant women and the unborn child. Therefore, if you want a child but have a history of particular or disturbed eating habits, it would be advisable to consider the idea of undertake a psychotherapeutic path: this can in fact be an opportunity to identify the reasons behind these behaviors in order to modify them, not only for one's own health, but also for the benefit of that of the child to be born.

They are classified as eating and nutrition disorders (DCA) of persistent eating disorders that damage the physical health and quality of life of the person. The pregnant woman suffering from DCA may interrupt her behavior for the time of gestation, just to protect the baby, but she may at the same time experience pregnancy as an obstacle to her anxiety about being in control of her body. .

Il Binge eating it is the most common eating disorder in pregnancy. It is characterized by binges that do not provide for compensation, so you eat until you feel full and then feel disgusted with yourself.

Are you pregnant after anorexia?

Some studies have shown that anorexia can lead to complications in pregnancy such as preterm birth, microcephaly in the fetus e nausea accentuated in the first months of pregnancy. However, it should not be thought that becoming a mother after anorexia is impossible: the important thing is to contact a trusted gynecologist, continue to follow psychotherapy and make the necessary checks before and during gestation.

In addition to bulimia and anorexia, there is another eating disorder that has become more and more frequent in recent years: it is the pregoressia, from the union of English words "pregnancy" e "anorexia", pregnancy and anorexia. In other words, it has all the characteristics of anorexia, only that it begins during pregnancy.

Ectopic pregnancy, symptoms, causes and how to behave ❯