Pregnancy, belly and everything you need to know 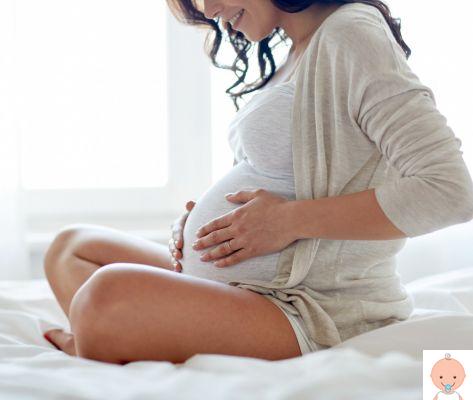 La belly is the protagonist of every pregnancy. She changes over the course of the nine months transforming the woman's body to best accommodate the baby. She grows together with that sense of motherhood that develops in all women during gestation.


In addition to being a symbol of motherhood par excellence, to make every woman wonderful, to carry the little one within herself until the moment of birth, the belly is the one that allows the future mother to understand. how a pregnancy is progressing, which sometimes sends signals, which at other times can tire, make the woman feel weak.

Read also: Pregnancy, duration and curiosity about the weeks of gestation

Today we dedicate a guide to the belly, in all its beauty and in all its complexity.

Pregnancy is a unique time in every woman's life. Even for those who have multiple pregnancies during their life, in fact, each one is unique, she stands out and is remembered by mothers for different reasons. During the nine months the woman changes with her baby and gets used to living with a belly that grows more each month. She caresses her, she feels her baby move. Sometimes that same belly hardens and forces her to stop, not to get too tired, just like an alarm bell.


Let's get to know them better "the baby bump", as it is commonly called, how it changes, how much it grows, what signals it sends to the woman.

How the belly grows in pregnancy

The belly gradually grows and manifests the growth of the uterus. The latter, in fact, increases its volume over the months, to make room for the growing baby, for the placenta that must give it nourishment and for the amniotic fluid, whose function is to protect the baby. For the first 3-4 months, the belly remains small enough, and then gradually grows so that the rest of the body also gets used to this physical change in the woman (especially the muscles and the spine). In the first month, for example, the mother does not even know that she is pregnant, the belly is not visible, but the woman may begin to feel a feeling of swelling and weight in the lower part of the belly. But let's see better how the belly changes in the 9 months of pregnancy.

When you start to see the baby bump

As anticipated, in the first month of pregnancy the woman remains physically identical. Little changes in the second month: the belly continues not to be seen, has not grown and has not changed its volume at all, this is because the uterus is still far below the pubic bone and therefore it is impossible to be able to see anything. To begin to see the growth of the tummy, it is therefore necessary to wait for the third month of pregnancy.

Belly at 3 months of pregnancy

Il third month of pregnancy it is among the most delicate and important. And, this month, a woman is less focused on belly growth and a lot more on fetal health. It is well known, in fact, that the excess of the third month puts the baby "out of danger" from abortions and genetic malformations that, otherwise, the advanced tests to which all women are subjected during pregnancy (nuchal translucency and bitest in primis) would have already highlighted.

And right at the end of the third month, between 10 and 12 weeks of gestation, we can say, the uterus has grown enough to come out of the pelvic cavity (the bony pelvis) and sprout above the pubic bone. What does it mean? That a tummy may begin to appear, still very small, imperceptible by those who do not know that you are pregnant, but that future mothers will notice immediately.

The belly begins to be more visible, developing forward over the course of the fourth month. The body gradually begins to change. Right in the fourth month, some women may notice the appearance of a darker vertical line that starts from the navel and goes all the way down to the pubis. It is the so-called linea alba, an absolutely physiological event in pregnancy caused by hormones and hyperpigmentation (i.e. excessive color) of the skin of pregnant women. He will keep the woman company until the end of the pregnancy.

How Much Should Your Belly Grow Each Month? We know that every woman is unique and that every female body is different, but what matters is not so much the volume of the belly, but the growth of the fetus. At each checkup, in fact, the gynecologist initially and the midwife in the last stages measure with an ultrasound or with the so-called "Leopold's maneuver" (bringing the hands close to the belly to understand the distance the height reached from the uterus with respect to the pelvis).

Roughly, growth is expected to be 1 centimeter per week. In the last weeks of pregnancy, growth can sometimes stop and the belly will decrease in volume. There is no need to be alarmed, however, since this particular phenomenon is generated by the displacement of the child who descends into the pelvis, ready to be born.

Belly that does not grow in pregnancy, what to do?

If in the first months of pregnancy, the belly that remains small is a normal factor, as the months advance, a small belly, which always remains the same, must make you suspicious. The causes for which one belly does not grow they are different but may result in fetal growth retardation or arrest. Usually the cause is a lack of oxygen and nutrients by the placenta. A problem that is related to the mother, a maternal pathology that does not allow sufficient oxygenation and nourishment to the baby. The non-growth of the belly could also be caused by the incorrect lifestyle habits of the mother (smoking, intake of alcoholic beverages, drugs, poor nutrition, etc.). However, fetal growth problems could also be generated by malformations or pathologies affecting the baby. The gynecologist will identify the causes, subjecting - if necessary - the woman to further examinations.

A hard belly is a fairly common phenomenon among pregnant women. It can occur both in the first trimester and at the end of pregnancy, but the reasons are different. In the first month you may feel some pain in the belly, due to the implantation of the embryo, but it is absolutely natural and there is no need to worry. In the last weeks of pregnancy, however, there are times when the belly becomes hard as a stone. Depends on what? Or from the position that the baby has assumed in the belly, for example if the bottom or back are pointing up or - more frequently - it is about contractions. It is not a question of labor contractions, attention, the sensations are very different.

If the hardening affects the belly for a long time, it is better to consult the gynecologist.

How do you know if it's a boy's or a girl's belly?

But is it true that from the belly it is possible to understand if a boy or a girl is coming? There are many different folk traditions that link the sex of the baby to the shape of the baby bump or to other details of the mother.

According to tradition, women who are expecting a boy would have a more pointed belly, more protruding towards the outside, while women who are expecting a child would have a more rounded belly. There is absolutely no scientific basis on this popular tradition, but basically it's fun to guess, as our grandmothers and great-grandmothers did when medicine was not as advanced as it is today and they could only find out the sex of their baby at the moment of birth.

Pregnancy: the things nobody says ❯

add a comment of Pregnancy, belly and everything you need to know