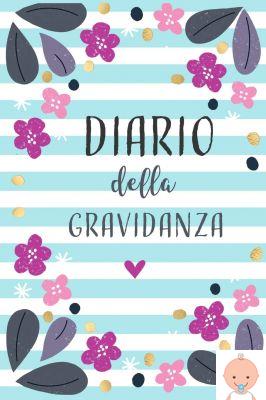 Marta tells us how and when she found out she got pregnant the second time. She and Gigio wanted another baby but they did not think that the first attempt would have been successful ... meanwhile, here you can already see the photo of her baby's first bedroom: the ultrasound showing the gestational chamber at 4 weeks of pregnancy .. measure only 0,5 cm...


How long does it take to conceive a baby?
Some time ago I read an article in which it was said that the average time it takes couples to conceive a child is 11 months. For me, on the other hand, they are enough a few seconds.

Giulio, my first child, was the classic exception that confirms the rule: unprotected intercourse at the end of menstruation and ... paf, the die was cast.
It was a coincidence, I said to myself ... and I was told by many, and so with the second child I wanted to organize myself and calculate a reasonable period of attempts to 3-4 months.

Early September pains in the breasts, kidneys and classic heavy legs (which, I learned later, are also typical symptoms of pregnancy) made me believe that my period was coming and that the first attempt was not successful. end. I stocked up on sanitary pads to avoid emergencies - that is, to send my husband to the supermarket to buy them - and I waited patiently for my little things to arrive. A week late, however, I got worried, and I decided to do a first analysis, the so-called Beta HCG which measures the level of a hormone in the blood and which gives you a first overview of the situation. Do not ask me why I did not buy the classic stick at the pharmacy ... I just know that I did not want to pee on a plastic stake also because the result is never 100% and anyway, if I had been pregnant, I would have still had to do the Betas.


No sooner said than done. At 7.30 am on 9 September I went to the ASL and after waiting "only" 60 minutes in a room where the average age was 85, I was able to take the blood sample. The nurse was very kind and she told me that they would treat those analyzes with "urgency"; in this way the same evening I could have gone to collect the results. I was not yet convinced that I was pregnant and I blamed the delay in menstruation at the "change of season".
With the heat of early September, the short sleeves and the huge white patch that the caring nurse had stuck to my arm it would have been impossible to hide that I had done some tests but to avoid explaining to colleagues in a heroic gesture I tore the patch and skin in a split second. It was not yet time to get the news out.

At 18.30 pm, after work, I finally collected the tests and they were waiting for me under the door, in the car Gigio and Giulino who came back from the park to pick me up. The analyzes were clear: we had hit the mark; it had been much easier than expected and my Betas, by the second week of pregnancy, were already over 6.500 (in a non-pregnant woman the beta value is 5).
Gigio hugged me excitedly and Giulino rejoiced "long live little brother" even if I am not convinced that he has fully understood the meaning of the matter.
At home, while I smelled - already with a bit of nausea - the flowers that my husband had brought me, I felt a certain affinity with Michelle Pfeiffer in the film 'The Witches of Eastwick', when, to justify the large number of children she produced he declares  "I just need to brush my teeth to get pregnant!"
Marta


Diary of a pregnancy: who is Marta?

Discuss Marta's diary in the Pregnancy forum of the community of


Marta in the community of has the nick supermamy