Pregnancy week by week with pictures 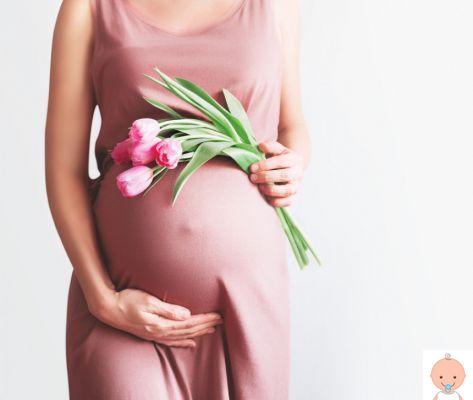 You have discovered that you are pregnant and you are at the beginning of a wonderful adventure! When a woman discovers she is pregnant, the questions are many: what are the symptoms in the first few weeks? Which exams are to be done during pregnancy? What happens to the mother and the baby? How does a woman's body change during gestation and how does the fetus grow during the nine months of pregnancy? In this guide, which will accompany you during the 40 weeks of pregnancy, you will find all the answers and by clicking on each week of pregnancy you can find out what happens to you and your baby.

The trimesters of pregnancy

Pregnancy splits into three quarters. Even if nothing is visible on the outside, the first trimester is the most important phase for the subsequent continuation of the pregnancy.

Your body is not showing any noticeable changes yet, however if conception has taken place a lot is happening inside you without you noticing.

Are you still waiting for the period and if you are looking for a pregnancy you are crossing your fingers so that they do not come. You will be able to take the pregnancy test on the first day of your delay. If the test is positive, then you will take a blood test to confirm the result.

Most women may not feel any changes in their bodies, not least because in the third week of pregnancy, conception has just occurred. You may have lost your appetite due to a bit of nausea and therefore you may have lost weight, or on the contrary you may feel a little swollen or have slightly gained weight because you are in the grip of incredible hunger.

You can begin to feel the first symptoms of pregnancy: nausea, fatigue, sore breasts. The urine test already detects the presence of the hormone hCg: positive!

The embryo measures 1.5 / 2.5 mm. It can be seen with a transvaginal echo. The head and the body can already be distinguished, and the little heart begins to beat.

From the ultrasound it can be seen that the embryo measures 4/6 mm. The first organs begin to form, and a first draft of the placenta. The increase in hormones can lead to worsening in morning sickness.

In the seventh week the embryo measures 7/9 mm. Arms, legs, nose are formed. Genital organs also begin to form, but sex cannot yet be distinguished.

L'embryo at 8 weeks size 8/11 mm. It is the right time for the first visit. In this week the sex is differentiated, the ossification process begins and the first spontaneous movements begin to be present

The fetus (from the end of the third month it is no longer an embryo!) is 13/17 mm long and weighs about 1 gram. The sex is now established, and the elbows and the first joints are formed.

The fetus measures 27/35 mm and weighs 4 grams. It has open eyes, external ears and lips have formed, and the "tail" disappears. The external genitals begin to form.

The fetus weighs about 7 grams. The head is about half of the total body size. Nails begin to grow on the fingers.

Its weight doubles, the fetus begins to have spontaneous reflexes and movements of the intestinal tract. Mom should start to feel better, as most of the ailments of early pregnancy go away. Gender can already be distinguished by ultrasound.

The second quarter begins. The weight doubles again, all 20 teeth are formed, the abdominal organs are perfected and reach their final location.

The fetus measures approximately 13 cm. Start peeing in the amniotic fluid. It is also able to "breathe" the liquid causing it to enter and exit the lungs.

The fetus weighs about 70 grams. He is able to suck his thumb. His skin is very thin and the veins can be seen. Hair begins to grow.

The fetus is 16 cm long and weighs about 85 grams. The nails are fully formed, and the movements begin to be more coordinated.

The weight doubles, thanks to the formation of the first deposits of fat under the skin that will help maintain a constant temperature at birth. He begins to react to external noises that annoy him.

It grows rapidly, the ossification process continues. The little fingers are perfected and the fingerprints begin to appear.

Permanent teeth form underneath the milk teeth. The fluff appears on the body, which will remain until after birth. In females, the ovaries begin to develop oocytes.

We are in mid-pregnancy. The fetus is 25 cm long and weighs almost 300 grams. It begins to cover itself with vernix, a substance that serves to protect it.

The baby moves around by swimming in amniotic fluid, and this is often the time when he positions himself upside down to stay there until delivery.

The baby continues to grow: it is almost 30 cm long and weighs more than 400 grams. Eyebrows grow.

The fluff darkens, and meconium, its first stool, begins to develop in the intestine. Preparatory (Braxton-Hicks) contractions may begin to be present but the baby does not feel them.

The baby weighs more than half a kilo and is fully formed. Now he begins to accumulate the fat he will need at birth. If he were to be born now, he would have some chance of surviving with special care.

The bones continue to grow and become stronger. The baby now weighs more than 700 grams.

The skin becomes more dull. The child hears sounds coming from outside and distinguishes light from dark

The baby's skin is "wrinkled" due to the continuous stay in the liquid. The face begins to take on the definitive features that he will have at birth.

Eyelashes develop and skin fat increases more and more. In boys, the testicles descend into their home this week.

The baby begins to be able to regulate his own temperature. The bone marrow begins to produce red blood cells at full speed. The fetal movements decrease, because the space is reduced.

The baby weighs 1.3 kg and is almost 40 cm long. The mother can begin to distinguish real sleep / wake cycles in the baby's habits.

The irises begin to dilate and shrink in response to light. The skin becomes less reddish and more rosy due to the lighter fatty deposits that form.

The baby continues to grow, reaching almost 2 kg mainly due to the increase in fat and muscle. It is increasingly difficult to find space to move.

The baby begins to produce surfactant, a substance that allows the lungs to develop fully. After this week, he will then be able to breathe on his own at birth.

The child has exceeded 2 kg. The hormones produced by the placenta begin to activate the production of milk in the mammary glands.

In the last few weeks the weight can increase up to half a kilo per week, but it is no longer nearly constant as in the first two quarters, varies from child to child.

The baby continues to grow and sink into the mother's tummy, often causing the urge to urinate very frequently.

The baby learns to breathe by inhaling amniotic fluid, and this can lead to hiccups, easily noticeable by the mother.

The baby is still growing and pressing on the pelvic nerves of the mother, who can easily feel the "jolts" in the legs caused by this.

Here we are !!! The baby is lowered again, and in some cases there is the loss of the mucous plug, which sealed the uterus, a sign that the birth is near!

The baby is at term, ready to be born (although it could still take up to two weeks ..). It should weigh approximately 3 / 3.5 kg. Her immune system is still immature, but it will strengthen with breast milk. The adventure begins !!

Photos of pregnancy from 1 to 40 weeks. Images of the belly and fetus from the first month to the ninth month of pregnancy.

In pregnancy the body changes week by week, the belly grows, the breasts swell and prepare for feeding. At the beginning, the belly is not even visible and in very thin women it can also remain invisible until the sixth month, especially if the pregnancy takes place in the winter months and therefore you dress in heavier sweaters and jackets; in other women, on the other hand, the tummy can start and be seen right away, as well as the breasts that enlarge and the hips that widen, preparing to welcome the baby that will grow in the womb.

A video that shows him in a very suggestive way development of the fetus within the womb. The images are taken from the National Geographic Channel. Good vision!

How many pounds do you need to get pregnant? Experts agree that weight gain of maximum 12 kilos, although a lot depends on the starting weight and the body mass index.

During the nine months of gestation it is necessary to carry out some medical examinations to check our health and that of our baby, however know the sex of the child or the expected date of delivery, etc.

Here is the list of exams to be done in the three trimesters of pregnancy, the compulsory exams for our National Health System (SSN), and the optional and / or recommended exams. However, it is always necessary to contact a trusted private gynecologist or ASL, who possibly works in the facility where you want to give birth.

add a comment of Pregnancy week by week with pictures