Pregnant at 25, but it is a hysterical pregnancy 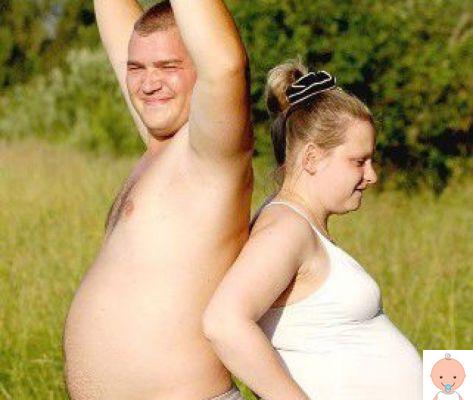 Many women often complain that their men cannot understand theirs disorders during pregnancy, but it also happens that some men may suffer from the same pregnancy symptoms of their expectant companies. Morning sickness, cravings, weight gain, and pains from final labor. A sort of identification with the pregnant partner. This "pathology" is called Couvade syndrome, known more as hysterical pregnancy. It is a very rare syndrome that affects very few people worldwide every year.

READ ALSO: If he has pregnancy symptoms: childbirth envy and couvade syndrome

A syndrome that can affect men, making them feel firsthand what it feels like to be "pregnant". And that's what's happening to a 25 year old boy from London, Mike Dowdall. The young man suffers from morning sickness (Read), wakes up craving specific foods, has hot flashes and a belly that looks just like that of a pregnant woman. All like her partner Amanda Bennett, who is actually pregnant.

READ ALSO: Pregnancy disorders, a remedy for everyone

For Mike, however, it's just a hysterical pregnancy (Read), diagnosed after the man had been experiencing a variety of ailments for weeks and did not know how to explain them. The origin of this syndrome is not yet clear. According to some scientists it could be caused a high level of female hormones in the organism, while for others it is only one psychosomatic condition caused by factors such as paternity anxiety or closeness to a partner expecting a baby.

Lots of big bellies and lots of dads! A gallery of tender and funny images


The only sure thing is that Mike is carrying on the pregnancy just like his partner. Although in the end only Amanda will give birth to their child. But Mike could also develop postpartum depression (Read) ... just so as not to miss anything!

add a comment of Pregnant at 25, but it is a hysterical pregnancy