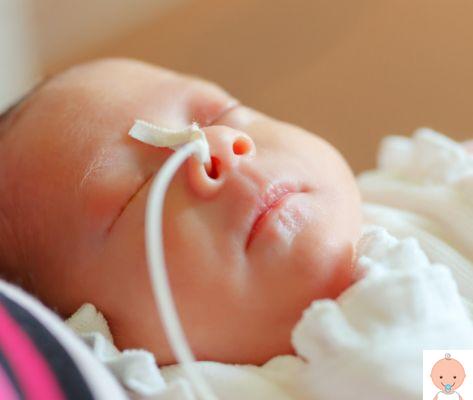 The pregnancy physiological lasts about 40 weeks. During this period the fetus develops completely to adapt to extrauterine life. Infants who are born earlier, and therefore have not completed the full development and maturation of some organs including the liver and lungs that perform fundamental actions, depending on the time in which they are born, can have great difficulties in setting and shooting.
One of the most important problems that can affect the baby is related to the functionality of the lungs, which depending on the time of birth, are partially or totally immature and therefore unable to guarantee spontaneous and autonomous breathing.

La sindrome del distress respiratorio (Respiratory Distress Syndrome RDS) it is caused by the deficit or by the lack of pulmonary surfacant, a protective mixture of phospholipids and 3 lipoproteins secreted by type 2 pneumocytes that allows normal gas exchange in the lungs, allowing them to swell with air and prevent the alveoli from collapsing. This disorder almost always occurs in all those newborns who are born before the 37th week, that is, premature even if the greatest risks are run by babies who are born with severe immaturity, and therefore with a much higher risk of developing serious respiratory problems.

In addition to prematurity, there are also other factors that increase the risk of the baby suffering from respiratory distress and are:


While it is true that some maternal pathologies increase the risk of respiratory distress, it seems that the risks are lowered in those newborns whose mother suffers from chronic problems related to high blood pressure due to pregnancy such as gestosis or if there has been a breakdown of the water for many hours before birth, because these events cause a lot of stress in the little one, accelerating the maturation process of the lungs.

How to prevent respiratory distress syndrome

However, it is important to know that respiratory distress syndrome can be prevented by:

This therapy is also implemented when the birth is triggered spontaneously and suddenly from the 24th week onwards, associated with tocolytic drugs that slow down the process of labor at least until it is certain that the drugs have taken effect. It is not always possible to implement it in the case of premature birth which often evolves very quickly and there is no drug that blocks the process.

After the birth of the baby, in most cases already within minutes of being born, it is possible to check if he suffers from distress respiratorio while in other cases it is possible to discover it only after several hours and the typical symptoms are:

To confirm the diagnosis of respiratory distress syndrome, already suspected for the symptoms that the baby manifests and for the clinical history, i.e. premature birth, gestational diabetes, etc., it is necessary to perform some tests on the baby including a chest x-ray and blood gas. These tests show respectively that the lungs have the typical characteristics of respiratory distress with diffuse atelectasis or they appear in ground glass with an aerial bronchogram while the results of the analyzes show a variable degree of hypoxemia and hypercapnia.


Once confirmed, some laboratory tests may be needed to rule out that the little one has it going infections or sepsis, very dangerous and that can gravitate very quickly. Once RDS is diagnosed it must be treated otherwise it could also cause the death of the little one. Of course, there are different stages of respiratory distress and not all of them are serious, neither involve invasive maneuvers nor compromise the future quality of life of the child and often resolve themselves in a few days. The most important thing is that the newborn receives the appropriate therapy designed according to his difficultiesà and considering that the body is not yet able to re-regulate itself, ensuring that the body remains at the ideal temperature.

Depending on the degree of respiratory distress u will be studieda therapy that first of all includes hospitalization in the Neonatal Intensive Care Unit (NICU) where the baby will be taken care of by a team of neonatology specialists who will constantly monitor all vital parameters and the course of development with the regression of respiratory difficulty trying to prevent other unfortunate onset that can affect premature babies such as cerebral hemorrhage , necrotizing enterocolitis, bronchopulmonary dysplasia, infections and patency of the arterial duct.

Other problems of the premature baby

Other problems that the premature baby can present depending on the gestational age in which he comes into the world are:

Giving birth: does it really hurt that much? ❯

add a comment of Premature birth and respiratory distress syndrome