Radiation and CT scan in pregnancy, what are the risks? 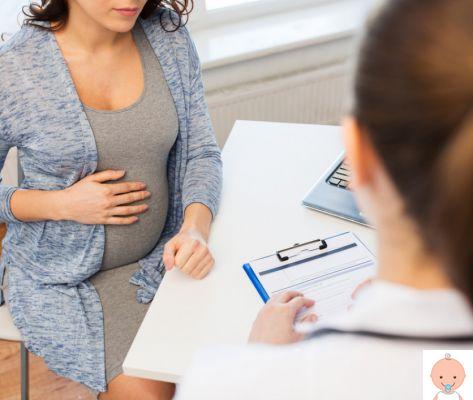 Radiation and CT scan in pregnancy

Many women when they are pregnant or suspect they are pregnant have the fear of having certain tests for them radiation that they contain. Let's try to clarify what can be done and what are the risks in case of CT scan and rays during pregnancy.


First of all, I would like to clarify what radiation is and what it can cause in the human body (regardless of pregnancy. These radiations are called X-ray and they are small particles capable of passing the human body from side to side to fix the image that interests us on a screen. They are particles so small that we cannot notice what is happening. Depending on the power of these radiations, the damage in the composition and growth of the cells can be more or less important. For the two exams we have mentioned, the radiographs and TAC, we can say that they have a slightly stronger power than the radiation normally present in the environment.

But what happens to the body that undergoes radiation in a woman who is, for example, trying to become pregnant? Normally nothing, i.e. there is no evidence that for an X-ray dose obtained from for example an X-ray from the dentist there is any damage. There fertility it is not compromised and indeed it is suggested to perform all the tests or treatments that involve the use of X-rays before the search for pregnancy. Clearly we do not have to start doing x-rays like crazy to check any, only if it is requested we can deal with it without problems.


Let me give you another example of an exam that is performed just before pregnancy and which contains a share (albeit very low) of X-rays: the sonoisterosalpingografia. That exam that is used to see the patency of the tubes when trying to get pregnant in vain. The liquid that is injected into it contains small doses of radiation, which are needed so that it can be physically seen leaking from the tubes. It is not a risky exam and indeed in some cases it is absolutely essential to do it.

But if we talk about one early pregnancy, so in the first three months, we have to make a different speech. From what we understand, radiation is capable of causing damage to the composition and structure of cells, so we can understand that in pregnancy they are not exactly the best.
This is because, first of all Ovum e sperm they are also two cells and can undergo alterations, and above all the developing child can have damage during the development phase of the internal organs. We are therefore not talking about the very first days of pregnancy in which the embryo is still an agglomeration of cells, but about the subsequent phases when theorganogenesi, hence the actual formation of the internal organs.

Everything we have said so far for the x-rays we have to extend and multiply it for the CT scans. If it is usually quite clear what the x-ray is for and it is also quite well known that they emit radiation, on the CT scan it is not always possible to realize that it not only emits rays but also with stronger intensity compared to radiography.

To be clear, the CT scan is that exam that sees us lying on a bed that is inserted into a tube (closed or open) to view the inside of our body. Compared to simple radiographs it is able to build three-dimensional images of the body and organs and therefore it is more suitable in some cases, such as evaluating if we have something at the level of soft internal organs such as the brain, liver or stomach and can even create moving reconstructions of what is observed, to understand the evolution that a particular disease has had in that person.

To do all this, it uses an X-ray dose, synonymous with ionizing radiation, slightly higher than the classic radiography, which also increases the risks proportionally.

There are no particular uses of this test in the general female population so there is no need (except in particular cases) to perform one before pregnancy.

CT scan in pregnancy it is practically never used, because there is absolutely no need to evaluate the growth of the child through this method, in fact we can use a source without rays such as theechography to do all this.

If you happen to have a CT scan during pregnancy or even before you know you are expecting a baby, I feel I can reassure you, in the sense that the damage to organogenesis can certainly happen but a single CT scan far from the belly is not able to cause such important alterations.

And then we come to the conclusion, to understand how to behave with radiation in pregnancy. The basic concept remains: avoiding exposure to ionizing radiation during pregnancy is best done if possible.

So all dental care, instrumental examinations such as mammography etc. would be better to be done before the search for a child.

If it is not possible to avoid the radiography or the CT scan of the abdomen it is very important that you communicate to the operators (even if they usually ask) that you are pregnant, in this way they can calibrate the machine with the lowest radiation dose possible. I pointed out to the abdomen because x-rays and CT scans taken in the first trimester of pregnancy away from the pelvis are not dangerous for the baby's development.

Furthermore, I would like to underline that, as always and as rightly emphasizes a well-known phrase "it is the dose that makes the poison", that is, if you happen to have to undergo tests that use radiation once nothing happens during pregnancy. The important thing is to try to avoid repeated exposure to sources of ionizing radiation.

add a comment of Radiation and CT scan in pregnancy, what are the risks?