Reflexes of newborns, what they are and what function they have 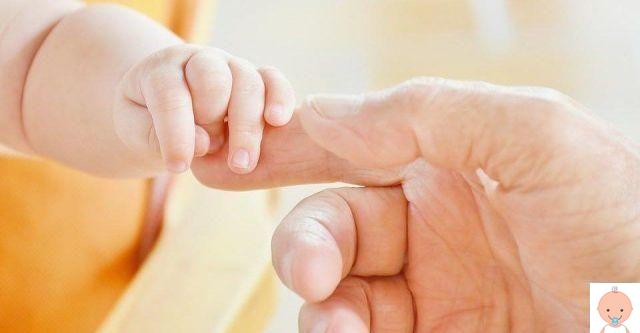 Even if they appear very small and tender, with that air innocent e disoriented, the Infants they are already gods little beings virtually perfect: the 40 weeks in yours womb, protected and pampered, they made them grow and to mature and, although much then awaits them outside the baby bump, when they are born they already have a series of lowercase but refined skills. Some of these are i reflexes innate. We see thing they are and what is theirs function.

I reflexes they are defined innate (o archaic) because they don't come kings by children, but are born with him. To what serve? To help them take confidence with the world than them surrounds. In addition, they are very useful also al pediatrician: they provide him with the information necessary to evaluate the system neurological of the most children.

Some reflexes of the Infants are fundamental to them survival, while others play a role important because they help them confront with what surrounds them, but they are in time determined“: They are that is present to the birth, but disappear after a while, usually in the first few settimane di "vita". Most of the innate reflexes it is destined to turn little by little in actions voluntary, which constitutes a passage fundamental in the development of the children.

So let's see which are the main ones reflexes of the Infants.

Reflection di sucking. This is certainly one of them indispensabili is preferably used for growth and survival same as ours puppies. Already at birth la sucking it's a instinct very strong: if you touch the cheek of the child, he turns the forehead and look for the nipple, soon to suck. Suction e swallow they are both reflexes innate. For example, during some echography in pregnancy there could happen to see the baby suck il inchhere is therefore explained that this instinct exists since always.

Reflection di principle. Immediately after the delivery, if you touch the span area of hand of neonateHe grab immediately what he came in with contact. This is also a 'action who already has learned in baby bump, where he tightened the cord umbilical. This reflection it serves for explore il world through tatto and, over time, it will turn into aaction voluntary, that is to grab deliberately the objects with the hands.


Reflection di Moor. The child has one reaction of apparent fright? This could be it reflection. You might notice it for example when, taking it in braccio, the is folded forehead and small reacts to click, as if frightened, spreading the dorsal, opening the arms and hands and folding the legs. And the response one stimulus sudden, which could represent a danger.

Reflection di march. If held suspended in place erect, With piedi that touch a surface di support, the newborn moves the legs mentioning gods passivated. Among the various reflexes of the Infants, this is intended for disappear in the very first settimane di "vita" and indicates the maturity of cerebellum.

Spinal reflex (you hate Galant). It's a test that pediatricians they use to understand if at level brain it's all a post. The doctor lays the baby down a belly in down and lightly touches the middle or lower part of the back near the column vertebrale: the child should bow to the the capital market sector, equity side and debt side, in all the preparatory and executive phases for the issue and placement of financial instruments; that was it touched.

Diving reflex (reflection di immersione). This reflection all babies have it and it is connected to a valve special that closes automatically the passage di air between the mouth i lungs, inducing thea when the small it is in water. In simple terms, "he does not drink". It is a reflection basic already in intrauterine life to allow the fetus to live absorbed in the liquid amniotic.

Please note:: the fact that the neonate do not swallow water when it dives it absolutely does not mean losing it view during the bath! Maybe it will superfluous say it, but better remember it.

add a comment of Reflexes of newborns, what they are and what function they have