Remembrance Day: how to explain it to children 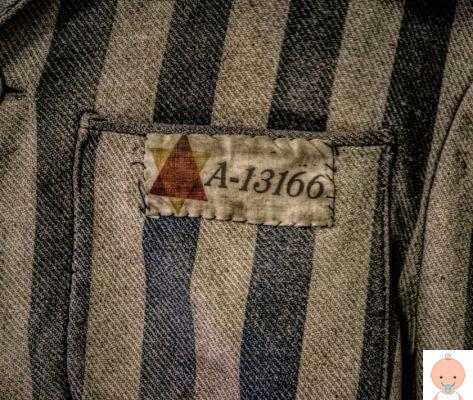 Remembrance day how to explain it to children

With children under 6 it is difficult to talk about barbarism, death, terror and persecution, or what we do not want to happen again. But we must remember, pass on, tell them about the Shoah. Let's see how it can be done

On January 27, 1945, the Soviet army crossed the gates of Auschwitz, the largest of the concentration camps built by the Nazis during the Second World War. Opening his eyes to a world he had not seen, forcing all those who knew and kept silent to the reality of the facts, bringing the materially responsible for the greatest mass murder ever before the court of men and history.

Read also: Day of Remembrance: poems and passages to remember

The death machine set up by Nazi Germany can be told in these cold numbers:

Because the scale of the tragedy, and the rational and blind fury of Hitler's regime, completely wiped out entire populations, often making it impossible to reconstruct the deaths of entire villages and communities.
Numbers that, going forward with historical research, seem to be even lower than the real ones.
Incomplete number. Why at victims of the Holocaust, for which Nazism had scientifically organized the total annihilation, must be added those of millions of dead, especially Poles and Russians, who were victims of reprisals and massacres carried out in the sole name of an alleged superiority of the Aryan race.


On January 27 we celebrate Remembrance Day

The memory of the Shoah, of the planned extermination of the Jewish populations from all over Europe.
And through the memory of the victims of the most obstinate and obsessive and insane of the plans of the Third Reich we remember all the victims of Nazism. Because this memory, which as a warning against hatred should live in the minds of all men, can prevent the repetition of similar tragedies.

However, the Shoah is unique. It is different from any other genocide or massacre that has taken place in history. Because it was not driven only by hatred or political and economic interests. It was the clearest manifestation of the programming of death. A death machine, the Nazi one, in which the "rationality" of the horror was aimed at the death of the last Jew in Europe, and soon, who knows, of the world. A killing machine that organized the deaths of thousands of Roman Jews not in their city, but thousands of miles away. Because hatred was not the prime mover of the Shoah. But the murderous maniacality of annihilation.

With the Holocaust, Nazism summed up all types of hatred towards the "other", and for this reason that organized by Hitler's regime can be considered the "final solution" against diversity. There are those who, for reasons of political interest, or because they are still infected with hatred, or because they are unable to bear the collective weight of the memory of a tragedy that cannot be understood and of which all the peoples of Europe bear responsibility, he prefers to deny even in the face of documents and testimonies.

But the memory can do a lot. Because the remembrance is active. It leads to questioning. To move hearts and minds making them organize so that all this does not happen again. Because remembering is a duty we owe to the dead and the living. The "DAY OF REMEMBRANCE" which is celebrated every January 27, in the nation and in schools, serves precisely to not forget the sufferings of that time, to know how to choose to avoid new sufferings today, to other peoples and other people, in any part of the world.

A single Anne Frank said more emotion than the myriads who suffered like her, whose image has remained in the shadows. Perhaps it needs to be so; if we had to and could suffer the sufferings of all, we could not live

Can we talk about the Shoah to children? Under the age of six it is possible but the concepts explained are too difficult to understand, but then it is good to explain in words they know, tell in the form of a story, read Anna Frank and Primo Levi, show films like "Life is beautiful", "The boy in the striped pajamas" or "Shindler's list".

Songs and poems to remember

"Difficult to recognize, but it was here.
Here they burned people.
A lot of people have been burned here.
Yes, this is the place.

Nobody ever left here.

Gas trucks used to get there ...
There were two huge ovens ...
and afterwards, they threw the bodies into those ovens,
and the flames rose up to heaven.

Up to the sky?

Yes
It was terrible.
This cannot be told.
Nobody can
imagine what happened here.
Impossible. And no one can understand it.
and me too, today ...

I can't believe I'm here.
No, I can't believe that.
Here it was always so peaceful. Always.
When 2000 Jews burned every day
it was just as quiet.
Nobody shouted. Everyone did their job.
It was silent. Calm.
As now."
based on 'SHOAH' by CLAUDE LANZMANN

"Since then, without warning signs,
This slow agony continually returns:
And until the moment
My terrible story is not told
The heart imprisoned within me burns "
JUDENREIN by SANDRA BIANCO

Other resources
Comic: Esther's star
Shoa: the memory against denial
Movies and books to remember the Holocaust

Remembrance day: what is the Shoah? Books and films to explain it to children ❯

add a comment of Remembrance Day: how to explain it to children