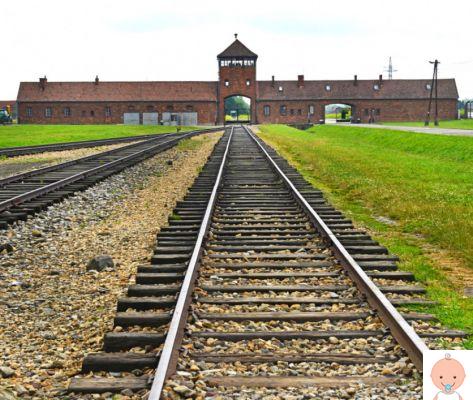 How do we remember the Day of Remembrance

Il 27st January Every year we celebrate the Day of Remembrance so as not to forget the Holocaust: here we present a collection, partial but significant, of poems, songs and passages from books, to never forget.

If this is a man

You who live safe


In your lukewarm homes,

you who find returning in the evening

Consider if this is a man

Working in the mud

Who knows no peace

What a struggle for half bread

Who dies for a yes or a no.

Consider if this is a woman,

Without hair and without a name

With no more strength to remember

Your eyes empty and your womb cold

Meditate that this was:

I command you these words.

Carve them into your heart

Staying at home walking away,

Lying down and getting up;

Repeat them to your children.

Or the house breaks down,

Your births twist their faces from you.

Books to tell children about the Shoah

Many books that tell the Shoah. For all ages

Difficult to recognize, but it was here.

A lot of people have been burned here.

Yes, this is the place.

Nobody ever left here.

Gas trucks used to get there ...

There were two huge ovens ...

and afterwards, they threw the bodies into those ovens,

and the flames rose up to heaven.

Up to the sky?

This cannot be told.

Impossible. And no one can understand it.

No, I can't believe that.

Here it was always so peaceful. Always.

When 2000 Jews burned every day

it was just as quiet.

Nobody shouted. Everyone did their job.

It was silent. Calm.

based on 'SHOAH' by Claude Lanzmann

Read also: Remembrance day: how to explain it to children

"Since then, without warning signs,

And until the moment

My terrible story is not told

The heart imprisoned within me burns "

There were a hundred

There were a hundred men in arms.

When the sun rose in the sky,

Everyone took a step forward.

When the bells rang,

Everyone took a step forward.

So the day passed and it was evening,

But when the first star bloomed in the sky,

All together they took a step forward.

"Back, get out of here, filthy ghosts:

Go back to your old night ":

But no one answered, and instead.

all in a circle took a step forward. "

From the diary of Anne Frank

So wrote Anna a few days before the Germans broke into the secret lodging ... July 15, 1944

... Here is the difficulty of these times: the ideals, the dreams, the splendid hopes have not yet risen in us who are already struck and completely destroyed by the cruel reality. It is a great miracle that I have not given up all my hopes because they seem absurd and unworkable. I still keep them, despite everything, because I continue to believe in the innermost goodness of man. It is impossible for me to build everything on the basis of death, misery, confusion. I see the world slowly changing into a desert, I hear the roar ever louder as the roar approaching that will kill us too, I participate in the pain of millions of men, yet, when I look at the sky, I think that everything will turn to good again, that even this ruthless hardness will cease, order, peace and serenity will return. Meanwhile, I must keep my ideals intact; there will come a time when they may still be viable

Blowin 'in the wind

How many roads must a man travel

before he was called a man?

And how many seas must a white dove cross

before he falls asleep on the beach?

And how long the cannonballs will have to fly

before they will be abolished forever?

How long must a man look up

before I can see the sky?

And how many ears a man must have

before you hear people cry

And how many deaths there must be for him to know

that too many people have died?

How many years can a mountain exist

before it is washed away by the sea?

And how many years can people exist

before being allowed to be free

And how long can a man turn his head

pretending not to see

I died when I was a child

I died with a hundred others

passed through the chimney

and now I'm in the wind.

There was snow in Auschwitz

in the cold winter day

and now I'm in the wind.

Many people in Auschwitz

but one great silence

how strange I have not learned

to smile here in the wind.

I ask how can man

to kill his brother

yet we are in the millions

to dust here in the wind.

she is still not happy

the human beast of blood

and still the wind brings us.

I ask when it will be

that man will be able to learn

to live without killing

and the wind will settle.

Terezin is a village 60 km from Prague. It became infamous as it was turned into a ghetto where Jewish children were grouped before being sorted into various Extermination camps. In the Terezin ghetto, the largest number of child prisoners was concentrated, including infants. Terezin's children mostly wrote poetry. Of the 15.000 children who passed through the Terezin camp they were saved less than a hundred: most of them died in the course of 1944 in the gas chambers of Auschwitz

On a bright red sunset,

under the flowering horse chestnuts,

on the yellow sandy square,

yesterday the days are all the same,

as beautiful as flowering trees.

It is the world that smiles

that flowers bloom in here.

I can not fly.

I don't want to die.

Peter, a Jewish child killed by the Nazis in the Terezin ghetto

that binds you to the enemy and the gallows.

Miserable childhood, which inside the

Over there where childhood sweetly

in the small flower beds of a park

over there, in that house, something broke

when contempt fell upon me:

over there, in the gardens or in the flowers

or on the maternal womb, where I was born

In the light of a candle I fall asleep

maybe to understand one day

that I was a very small thing,

over there in the fields,

who sleeps and wakes up,

will open your eyes

and not to see too much

he will allow himself to fall asleep ...

Read also: Remembrance Day: how to explain it to children

The last one, the very last one,

like a tear of the sun when it falls

over a white rock

so yellow, so yellow!

to kiss his last world.

In a few days

it will be my seventh week already

ghetto: my parents found me here

and here they call me the rue flowers

and the white chestnut candlestick

But I haven't seen any butterflies here.

Last time was the last:

butterflies don't live in the ghetto.

Again the horror hit the ghetto,

a cruel evil that drives out any other.

who beheads his victims around.

The hearts of the fathers beat today with fear

and mothers hide their faces in the womb.

and takes his tithes from the herd.

Today my blood still throbs,
but my companions die next to me.

Rather than see them die

We don't want gaps in our ranks.

The world is ours and we want it to be better.

We want to do something. It is forbidden to die!

add a comment of Remembrance Day: poems, songs and passages to remember