Remembrance day: what is the Shoah? Books and films to explain it to children 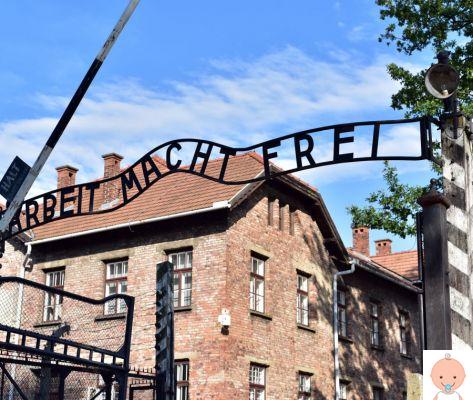 The meaning of the Shoah

What is the Shoah? The Shoah, also called Holocaust, is the genocide of Jews from all over Europe conceived and perpetrated by Nazi Germany and its allies. Through the Holocaust, in the course of second World War, were exterminated between 5 and 6 million Jews but also many of those who were called "undesirable" by the Nazis as Roma, homosexuals, the handicapped and the mentally ill.

During the Second World War, the Germans built concentration camps all over Europe. They were called work camps but they were de facto gods mass extermination camps where Jews were interned and made to work in inhuman conditions which - in most cases - resulted in their death after a short time. Children did not have a different fate from adults and it is estimated that there were about 1 million small victims of the Holocaust.

Read also: Remembrance Day: how to explain it to children

Every year in January the initiatives that want to make known the horror of the Holocaust especially to the new generations so as not to forget and so that the mistakes of the past do not repeat themselves. In schools, collective visions of documentaries and films on the Shoah are organized, debates are held, witnesses are hosted who have experienced the horror of the Holocaust on their own skin.

The initiatives for 2022 in the country

We see the initiatives (online due to the pandemic) scheduled for 2022 throughout the country:

On January 28, starting at 10:00, an online event was conceived for young people and schools with the staging of the play "Il memorioso", based on the writings of Gabriele Nissim and which in 2022 also celebrates the 10th anniversary of the first performance. The work reinterprets the Holocaust by intertwining the stories of persecution with those of the Righteous who fought against evil in its worst and absolute form. The event will be broadcast from Asteria Center.

Il January 27, 2022 the Tuscan students will be able to participate online and through the channels of the Tuscany Region in the Meeting of Memorial Day, in the presence of witnesses to the Shoah and deportation.

Teachers and students of Tuscan schools will be able to follow it with listening points by each institute.

Tuscany Region and Museum Foundation and Documentation Center of Deportation and Resistance of Prato, in collaboration with the Regional School Office of Tuscany (USR Toscana) and the Tuscan Historical Institute of Resistance and Contemporary Age (ISRT), in preparation for the Day of Memory 2022, organize "Traveling to Auschwitz - Online training path between history and memories".
In fact, various initiatives will be planned, including dialogues, or meetings, which can also be attended by Tuscan students, with writers, professors and associations on issues related to anti-Semitism and the importance of the transmission of "memory". Participation is open to all. The meetings, scheduled from 9 September to 16 December 2022, will be available in live streaming on the Facebook and Youtube channels of the Museum of Deportation and Resistance in Prato.

"Traveling to Auschwitz - Online training path between history and memories", launched in August 2022, will end with the Online meeting for Tuscan students on January 27, 2022 - Memorial Day (the program is being defined).
During the initiative, the testimony of the sisters Andra and Tatiana Bucci, deported at the age of four and six to the Nazi concentration camp of Auschwitz-Birkenau, and of Kitty Braun Falaschi, deported at the age of nine to the concentration camps of Ravensbrück and Bergen-Belsen, is expected.

How to explain the Holocaust to children

That 'Holocaust it is not an easy concept to explain and make understood before adolescence. However, children can approach this topic which will be further explored over the years. Even if in primary school teachers bring children closer to the theme of the Shoah through poems, stories and documentaries, it is only from middle school onwards that it will be fully explained and analyzed. Below we point out books and films suitable for bringing children and young people closer to the theme of the Holocaust. Readings and visions, however, should always be done through the mediation of an adult.

Books to explain the Shoa to children

Among the books to read to address the theme of the Holocaust we can recall:

Published by DeAgostini, the book has just been published "The star of Andra and Tati". The book, created by Alessandra Viola and Rosalba Vitellaro, tells the story of Andra and Tati, the two sisters who survived the extermination camp. When the Jews and villagers began to be deported to Nazi concentration camps, Andra and Tati were only Two little girls. From one day to the next they saw everything they had torn away. Too small to understand, Andra and Tati found themselves alone and full of fear. The world became a nightmare for them, from which it seemed impossible to escape. Andra and Tati, however, never stopped hoping and giving each other courage.

Movies to explain the Holocaust to children

Movies can also be a great way to start explaining the Holocaust to children. Between recommended movies there are:

add a comment of Remembrance day: what is the Shoah? Books and films to explain it to children