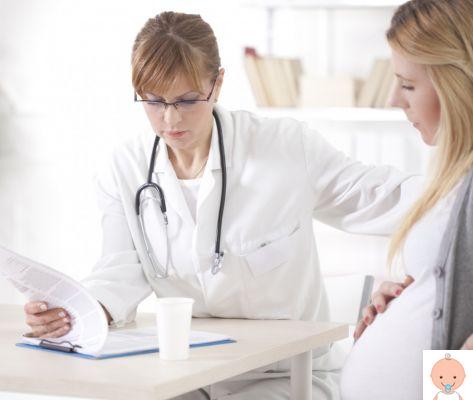 During the third trimester of pregnancy, you need to pay close attention to signs that may indicate that the pregnancy is not progressing as it should. These signs are above all blood loss and, in the most serious cases (fortunately rare), haemorrhages; both can be symptoms of placental problems.


Sometimes, in fact, the blood losses, even if of a minor entity, may be due to a placenta previa (i.e. inserted too low) or may indicate the presence of a retroplacental hematoma, i.e. a detachment of the normally inserted placenta (i.e. not in a previous position). There are some characteristics that distinguish a retroplacental hematoma that allow it to be distinguished from a haemorrhage caused by placenta previa. These features are:

It must also be said that sometimes it is not possible to trace a precise cause. The retroplacental hematoma can theoretically form at any time during pregnancy, but if it is very rare after the 12th week, it is more frequent in the first three months of pregnancy.
A hematoma originating in this phase almost always resolves without serious consequences within 12-15 weeks. If a retro-placental hematoma is found in the ultrasound examination, the gynecologist can prescribe drug therapy and in any case recommend that the expectant mother stay at rest.


The situation is different for the hematoma that forms in the third trimester of pregnancy or during labor, which involves greater risks for both the mother and the fetus. For this reason, especially in the later stages of pregnancy, it is necessary to pay close attention to the signs that could indicate a detachment of the placenta. In addition to blood loss (not necessarily abundant) other symptoms that may be indicative of this pathology are the violent pains and the strongly contracted uterus.

In the presence of such signs it is necessary to go immediately to the hospital where, most likely, the doctors they will proceed with a Caesarean section urgent, which in most cases allows the baby to be born in good health.
It is also possible that you opt for natural birth as long as it takes place very quickly because, especially if the complete detachment of the placenta occurs and the bleeding is abundant, the health of the mother and baby are in serious danger.