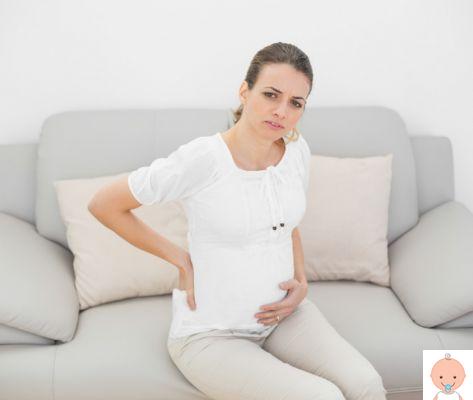 Intercostal pains occur more frequently in the second and third trimester of pregnancy, especially as a result of numerous changes occurring in the female body when a baby is expecting. Generally, at the end of gestation, the painful twinges and spasms begin to disappear because the baby is channeled in preparation for delivery.

Causes pain in the ribs and side in pregnancy

Among the most frequent causes of intercostal neuralgia are:

Pain in the diaphragm in pregnancy

One of the symptomatologies most frequent of intercostal neuralgia in pregnancy is the pain in the diaphragm which is sharpened in particular moments: it seems not to show up when lying down or at rest, while coughing, sneezing or sudden movements of the body can trigger pain, as well as simple breathing.

Pain is accompanied by

When pressing on the diaphragm area the pain increases.

Pain in the center of the chest in pregnancy

Of course, even if in most cases the intercostal pains are not a symptom of a serious illness, but only a physiological response to the changes that are taking place in the body of the expectant mother, one cannot underestimate an intense pain in the chest that goes always reported to the doctor. If needed, the doctor may prescribe more specific diagnostic tests to understand the nature of the pain, as well as an ultrasound.

If it bbaby moves on the right side of the uterus, especially towards the end of pregnancy, its weight and its movements can favor the comparison of pain and stinging in this area of ​​the side. The right flank pain on the rib in pregnancy it can also be caused, towards the end of pregnancy, by the changes that are taking place in the body, with a real shift of organs and structural changes to the pelvis that serve to make room for the baby and prepare the body for delivery.

Read also: Understanding bellyache in pregnancy: how to behave

Pain under the breastbone in pregnancy

Il pain under the ribs it is essentially caused by the increase in the size of the uterus which exerts a strong pressure on this area and also on the nerves, but it can also be favored, in the second and third trimesters, by the baby's movements in the belly and by its kicking. The pain associated with the child's position is especially acute when one is in a sitting position: just think that at the XNUMXth week the child is really big and practically reaches the area just below the breastbone. After the thirty-seventh week, the baby begins to channel itself towards the birth canal and this causes in most cases a nice relief.

Il treatment timely neuralgia in pregnant women is aimed above all at eliminating pain and spasms or at least at reducing their frequency. The doctor will be able to study the situation and possibly prescribe drugs pain relievers, such as acetaminophen, but some more natural remedies can still help you find relief:

Childbirth pains: what they depend on and how to experience less of them ❯

add a comment of Rib pains in pregnancy, causes and remedies