Scheduled caesarean delivery: everything you need to know 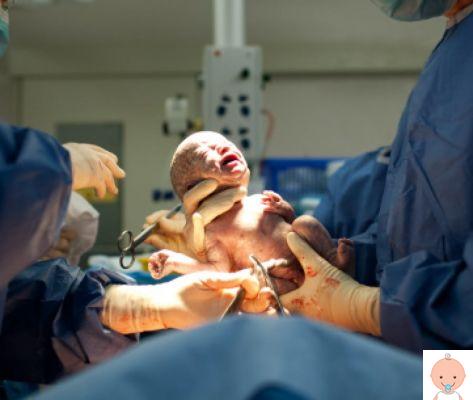 Cesarean delivery is distinguished from Natural childbirth since it is a real surgery. It occurs through an incision in the lower part of the belly, below the bikini line so to speak, and is used to deliver a baby in some particular situations.

It was born as a way of emergency delivery, when perhaps the child is not in a position to face labor and a natural birth, when he has particular problems or when problems arise location, umbilical cord around the neck, lowering of the heart rate. However, more and more frequent, in the country, are the scheduled caesarean deliveries, that is, decided in advance by the gynecologist, due to the baby's breech position or other situations.

Today we are talking about scheduled cesarean delivery, to better understand what it is, when it is done, how it works and solve the curiosities of the many mothers who approach this type of birth:

The experiences of mothers who have undergone a planned caesarean delivery are different and, at times, conflicting. There are those who have had a more than positive experience, believe that the planned delivery is calm, having avoided facing labor, pains and complications of childbirth.

Others, on the other hand, regret not having been able to have a natural birth, since they have suffered the consequences of a caesarean section which, as already mentioned, is in effect a surgical operation. The post-partum pains for some mothers have been severe and prolonged over time.

What to bring in case of planned caesarean delivery?

Excluding the baby's bag which is the same both in the case of natural birth and in the case of a caesarean section, we are talking about the necessities that a woman must bring to the hospital in the event of a planned caesarean delivery.

Below is a list of clothing and accessories needed to cope with childbirth and post-partum:

How long before scheduled cesarean delivery?

Il scheduled cesarean delivery it is the only one that allows you to know perfectly the date of birth of your child. With natural birth, in fact, it is possible to count the weeks of gestation, but you never know precisely when the baby will decide to come to light.

Usually the date of the planned caesarean delivery is fixed between the 37th and 38th week, then two or three weeks before the due date, the expected date of delivery.

The reasons why, usually, a caesarean is not scheduled at the end of the 40 weeks of pregnancy, are basically two: the first is that the surgeons have to deal with a less reactive uterus (not yet ready to contract as in spontaneous labor) ; the second is that, by the 38th week, the baby is smaller and therefore doctors will be able to make a smaller incision.

How is a scheduled caesarean performed?

The woman goes to the hospital on the agreed date with the gynecologist. She is hospitalized, like her for all the surgeries.

Il Cesarean section is an incision that the gynecologist makes on the abdominal wall of the mother first, and on that of the uterus later, to deliver the baby.

Before the cut, the woman is subjected to aspinal analgesiathat is, through a small catheter inserted between the spinal meninges, she is injected with a drug that removes the pain sensation in the lower part of the body. The mother therefore remains awake and alert at the time of delivery, but she does not feel pain.

Today, for cesarean delivery, a technique called "Stark method" or even sweet caesarean. It is a skin incision very close to the pubic bone, below the bikini line, and horizontally, with minimal aesthetic impact. A large cut is no longer made on the uterus, to deliver the baby, but, after making a small hole, it is the surgeons who digitally enlarge it. This technique also allows for easier healing.

How many days do you stay in the hospital for a caesarean section?

A woman who has undergone a caesarean section usually stays in hospital one day longer than someone who has had a natural birth and therefore 3-4 days.

Risks of a caesarean section

Caesarean delivery carries with it the risks that all surgeries can have. From reactions to analgesia to the risk of bleeding. Episodes which, however, are very rare indeed. The planned caesarean is a type of birth that is now very frequent in the country, which has become routine in our hospitals and is practiced with the utmost preparation and safety for mother and child.

Once the caesarean section has been scheduled, the woman will continue to undergo a series of visits, ultrasound scans, meeting with the anesthetist, monitoring, electrocardiogram. You will also have to stay fast from midnight before cesarean.

Once she arrives at the hospital, and undergoes the necessary checks before admission, she will wear the nightgown, the hair cap to be able to enter the operating room.

The process will continue with spinal anesthesia and caesarean section. A scheduled cesarean delivery usually lasts between 40 and 50 minutes.

La difference between a scheduled cesarean delivery and an emergency cesarean delivery it is already understood from the definition. The first is established previously between the gynecologist and the expectant mother, the second is carried out in cases of risk, when complications occur during natural birth or before.

Scheduled cesarean delivery is usually chosen in these cases:

The emergency caesarean delivery is chosen instead only in cases of seriousness, to safeguard the life of mother and child.

add a comment of Scheduled caesarean delivery: everything you need to know